Paul would like to say he had never been touched up by a female pensioner before but that wasn’t the case! It was, however, the first time it had been by a lady of Thai persuasion, and a Muslim to boot. It was also a novel experience to have it happen on public transport during the day’s first call to prayer. It was almost as painful as the flat imam who shrieked to his flock quite tunelessly and far to regularly.

He and Andrew had been squeezed onto the truck as if they were being transported to Smithfield meat market. 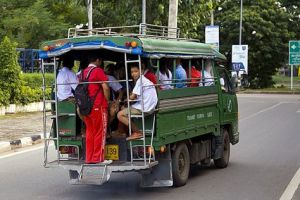 Twenty people had miraculously squashed onto the tiny Song-thaw and that was before Madame Weinstein had rolled up. Using Paul’s inner thigh as a hand rail she dragged herself up into the vehicle and collapsed heavily onto his lunchbox. By lunchtime itself she had already greedily partaken of his sausage roll and had had a bloody good go at his scotch eggs. Paul was shocked. He’d always thought pork was off limits to those of the Islamic faith. Madam Weinstein was obviously an exception.

When they arrived at an unpronounceable little town rather too near to southern Thailand’s Islamic insurgency, Paul clambered from the vehicle with the leg that stilled worked, happy to escape the Muslim fundamentalism that had been happening onboard. He bade the woman a smile as he left, he didn’t want to appear ungrateful. It was a characteristic he was ashamed of, but he could do nothing about it.

He was a natural tart.

He and Andrew then struggled across an unsafe road bridge with their lumpy rucksacks to get to the bus station on the opposite side of the highway. They were greeted with broad smiles by the locals and, as per usual, much hilarity. There seemed to them to be no hostility here towards unbelievers, not on the surface at least. Everyone from pancake pedlars to paternal pedallers, cycling their kids to school, were utterly charming. And, all seemed incredibly happy.

After an obligatory stop at the local ‘Seven Eleven’  in order to furnish Andrew with enough cigarettes to kill a laboratory Beagle, The Boys doggedly trudged towards the pick up point for their bus south.

The small building was not so much of a bus shelter, more a shelter for the homeless. A few elderly looking vagrants peopled the place with their roguish charm. One of the old boys was most insistent that Paul take his plastic chair. Paul was unable to refuse, even though he was very concerned the tiny piece of furniture might buckle accidentally beneath his occidental weight!

He sat for a while with the gentleman, smoking cigarillos and chewing the fat as Andrew looked on most amused. The main reason for Andrew’s delight was the fact that his husband was now being felt up once again. Only this time by one of the old geezers who was dressed as a 1970s pimp!

There was more than a whiff of ‘Huggie Bear’ about the cheeky chappie. Paul was well aware that if he didn’t move swiftly away his lunchbox could be on the menu again. He’d have to join the growing throng of performers using the hashtag ‘Me Too’ soon.

He posed for a quick photo, the retouching only occurring during the sitting! He assumed it must be down to the Penhaligons ‘Oud De Nil’ he’d sprayed on far too liberally that morning and absolutely nothing to do with his far too liberal appearance.

He did wonder sometimes if he’d had slut tattooed onto his forehead without his knowledge. He made a mental note to check when he next came before a looking-glass.

After a mercifully short while Andrew and Paul found themselves in a surprisingly comfortable air-conditioned mini-van heading towards the Malaysian border. Paul did a deal with Leh, their driver, to take them on to the actual border post and to wait for them as he and Andrew did a visa run in and out of the country.

After driving through mountainous jungle they reached the imaginary line between the two nations. Machine gun wielding soldiers smiled at them as they alighted, their fingers resting disarmingly on the triggers. Paul and Andrew smiled back wanting to stay on the good side of the seriously armed soldiers. There was obviously sometimes a touch of  trouble at this particular post thought Paul, hence the armies posting. He wasn’t sure whether the heavy armoury mad him feel safer, but he knew he would be most pleased when the whole diplomatic affair was over.

The Boys stamped out of Thailand, walked across the strange no-mans land that always fascinated Paul when they crossed an international land border, and stamped into Malaysia. Whilst in that marvellous country Andrew had a fag and Paul visited a public lavatory, then they then they hit the duty free shop.

There was a splendid array of cheap branded alcohol which surprised them both, especially as they had found it difficult to even get a beer on their visit to the country a few years back. They then stamped out of Malaysia and back into Thailand and were given a further thirty days on their visa.

There were a few times when being a UK citizen had it’s benefits. This being one of them.

They then found Leh and motored on to the small town of Satun, which nestled steamily in a jungle valley deep in south-west Thailand. They had not expected the place to be so charming. Yet it was like travelling back in time. As the boys headed into one of the rural suburbs they were transported to a riverine oasis of laughing children and their equally contented parents. 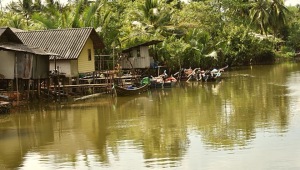 Hens clucked as mother hens mucked out. Dads  mended fishing nets. One man was washing his cock! One of the feathered varieties of course. All going about their daily life in a timeless and effortless fashion. It was as if time did not exist in the pretty dwelling. Other than the odd mobile phone, which now seemed to Paul, disappointingly ubiquitous across the entire globe.

As the heat of the day peaked at an astronomical high and the fecund grey clouds threatened to discharge their abundant moisture, the boys headed back to their guesthouse to avoid a good soaking. They partook of a brilliant yellow curry,  which was as good as the one made by their great friend Stella. She was always the benchmark when it came to Thai cuisine, having once managed an extraordinarily successful Thai restaurant in London. Her ears must have burned as hotly as the dishes they sampled on their travels,as each time they would gauge a curry’s  appeal.

‘Not as good as Stella’s’ one of them would often remark. On this, their latest excursion, their friend’s ears had probably not burned quite as often, as the food had come up trumps. Paul had even learnt to replicate a couple of the stranger dishes in order to cook them for her on the their return. If he could get hold of the inordinate variety of aubergine that existed in Thailand. He thought he may have to sneak some into his rucksack on the flight home. Surely BA couldn’t be sniffy about a touch of excess eggplant! Then again…

But it was not quite home time yet. Andrew and Paul were to make their merry way from the roasting town of Satun the next morning, and head out to another lesser known Island the latter had discovered.

The next morning the call to prayer blasted zealously into their furnace of a room at a rude 5am. There was really no need to set an alarm in Thailand’s Deep South. The mosque very thoughtfully did it for you. 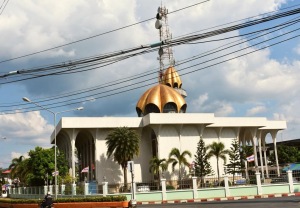 Thankfully, thought Paul, this fella was in tune. He really didn’t mind the exotic alarm call at all, but wholly disapproved if the holy man was religiously missing his top ‘B’ flats!

After an intensely bitter coffee (Apparently! A local brew!) they waited for the bus which was to take them to meet their Song-thaw, which would then head off for the small port of Pakbara. Paul took his cologne from his bag and went to spray himself. He stopped suddenly, changing his mind. Perhaps he’d give the Penhaligon’s a miss today. After all, one never knew who their travelling companions would be, and Madame Weinstein and her equally fruity brother, Harvey, who he’d met at the bus-top the previous day, were fresh in his mind. Too fresh!

When the bus arrived the boys climbed awkwardly between the pots and packages looking for a free seat. Paul spotted two towards the rear, he also locked eyes with a hulking German Adonis with eyes like cerulean pools. He flashed a blindingly flirtatious smile towards Paul, who did a little giggle worthy of that of an embarrassed schoolgirl. ‘Shit’ he thought mischievously, ‘Why didn’t I apply my ‘Oud De Nil ?’ But his ego had been well and truly touched up by the naughty moment.

He collapsed into his seat next to his soporific partner and then caught sight of a stunning young fraulein who was boarding the bus just behind him. She smiled longingly at the godlike creature to his rear. He realised immediately it had surely been her who had elicited the smile from the handsome Teutonic passenger, and not him. He knew he’d smelt a rat. He was losing his touch! 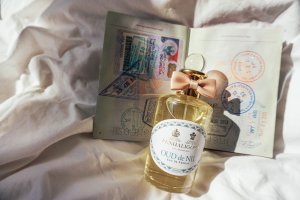 He turned and gave a cheeky smile to the young lovers behind him.

She was certainly a very lucky girl.

‘# Me Too Please’ he thought, sinfully, to himself.

The imam would most certainly not have approved!