Paul woke in paradise at 1.30am, his entire body stinging from the bites of a tropical squadron of insects. The little buggers were buzzing around him like miniature Messerschmitt, each keen to land and pick up their bloody payload, punctually puncturing him every seven seconds, or so it seemed! Added to the critters fighting trench war fare amid the folds of the ancient mattress, Paul wanted to commit insecticide, but had neglected to pack any!

There was a mosquito net but it resembled a moth-eaten piece of Victorian lace as it hung,spectre like, from the bamboo ceiling, only serving to disturb Paul and Andrew’s sweaty slumber even further. Andrew had twice been violently caught amongst it’s billowing grey mesh, the first time nearly garrotting himself, and on the second occasion falling heavily to the floor, swaddled like an overgrown infant. Paul had had to untangle his partner swiftly from the errant material, making even more holes in the useless piece of rag.

Andrew struggled proudly to his feet and went out onto the silken beach, the Indian ocean splashing just feet from the balcony of their overpriced bungalow on the underdeveloped island. Paul lay inside under the ragged remainder of the mosquito net, listening to the mercurial generator, which was coughing and spluttering it’s way through the night, drowning the sound of the ocean with one mechanical wave after another. The only other noise heard during the early eastern hours was the incessant coughing and spluttering of the friendly Berliner in the hut next door, who might have been auditioning for the part of Violetta, in ‘La Traviata’ – hourly.

It was a most productive disorder.

In fact, the entire nightly soundscape of stunning Koh Kradan reminded Paul of a touring fun fair. He imagined, during numerous bouts of torrid wakefulness, stepping onto the dove white sands outside, riding the ‘Waltzer’ and grabbing a quick Toffee Apple.

It was not the sound of paradise.

And he most certainly could not sleep.

But sadly there was no fun fair. Just the gigantic, archaic generator and the sanatorium next door.

Koh Kradan was paradisiacal during the day. Other than the day trippers who polluted the near pristine beach with their screaming and floating.

It was pure hell at night.

Paul only hoped he had not contracted Dengue Fever. Especially as the eccentric owner of their prefabricated resort was regularly holding court across his average restaurant, endlessly talking of his recent recovery from the killer disease!

The boys had come to the final island on their Thai odyssey, arriving from the striking  Koh Bulon.

Bulon, too, had had it’s own share of drama.

Not least, a jungle which the locals dare not enter for fear of the many ghosts who they swore resided there. Paul and Andrew had just happened to take lodgings on the edge of this forbidden place. They’d heard strange voices in the night, but had not been nearly killed by a malevolent mosquito net as on Kradan.

Koh Bulon was also an island stalked by giant lizards, some three metres long. Paul had got a shock early one morning as he saw a large reptilian tongue, which he was pretty sure did not belong to his husband, appear from behind their jungle hut. The magnificent creature passed majestically by, quite disinterested in the two goggle eyed tourists who watched astounded just feet away. It had been a magnificent sight.

A rare co-existence between fauna and those fawning over it.

There was incredible nurture as well as abundant nature on the charming island. A tiny school where the teachers rented out tourist huts, in which Paul and Andrew had briefly boarded prior to discovering their broody jungle abode, catered to travellers and pupils alike. It was a great lesson in how to use tourism to enable the local community. ‘A’ plus, Paul had thought.

And a reggae bar!

Paul wondered if it could be bettered.

It was true their next island, Koh Kradan, where they were now residing, was a veritable Eden, but she had a vicious sting in her tail!

She was an Island of expensive resorts. No true inhabitants – only poor food and inflated prices. Together with the BBC’s ‘TENKO’ style hut, in which the boys were now staying, it was a touch disappointing.  Paul considered it to be the last resort. He decided he would never again choose to stay in such a place. Although Kradan was certainly a beauty queen, she was somewhat lacking in the personality department.

One would have a much better time, Paul knew, with the slightly sluttish Koh Mook who lay brazenly to the east. He’d always preferred a bunch of scruffy locals puffing away, rather than a division of armoured push-chairs from Potsdam!

Koh Kradan’s beach had recently been voted eighth best in the world by ‘Conde Nast’. Paul could not disagree, but thought it unlikely he and Andrew would return anytime very soon.

They would probably leave it to the honeymooners and the snorkelling toddlers.

And the beautiful fish. 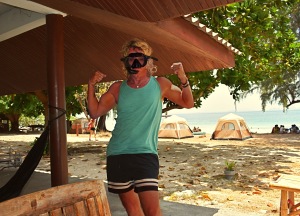 Especially as Paul quite suited a snorkel. Or at least that’s what Andrew told him, no doubt hoping for a quieter life!

The next day the boys were to leave for the big polluted smoke of Bangkok, but not before they had to endure another night in their over priced ‘Deer Hunter’ shack. Paul wondered how Robert de Niro would have coped. Then thought better of it.

It wasn’t a night for ‘Russian Roulette’.

That would no doubt occur in Bangkok.

Besides, the tangled mosquito net in the beautifully twisted Koh Kradan would probably get them first!

He lay back and drifted away to the soothing rhythm of The Straits Of Malacca, as they elegantly lapped the silver shore like slithers of mystical mermaids. The sound of the sea was a soporific shanty down in Thailand’s Trang Islands. An intense aquamarine lullaby. Paul let himself drift aimlessly away. But soon enough he felt a sudden tug back towards the shore. A distant rythym drummed steadily in a far off lighthouse. Or rather, a far off generator house. It thudded pleadingly. Gradually bringing him, involuntarily, back to land.  He was once again marooned. Beached in his bamboo cell.  A landlubber dreaming of the sea, and instead being deafened by the bloody generator all night!

The sound of paradise! Lost!

Paul was more than ready to return to the real Thailand…..