When Tina was just twenty-one, she had left chilly Blighty to begin her career as an artist on the stunning island of Antigua. She had stayed for more than a year on the island turning tricks at a local pottery as many a Caribbean boy attempted to turn tricks on her. 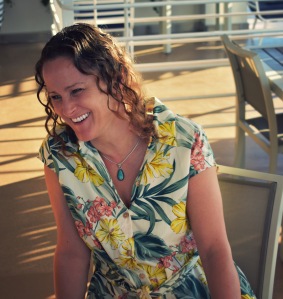 As Linda’s crew hit the island almost thirty years later not much had changed. The place was still gorgeous; the weather wonderful; the men quite insatiable!

They headed away from the main crowd – always a good idea on a cruise. Paul knew that to do the obvious meant that one would usually be joined by a few thousand passengers jostling for photo opportunities.

He hated to be herded, it made him feel like a cow in an abattoir. A sad creature on route to the slaughter! He was well aware he could manage the latter in a quiet bar somewhere minus the bovine melee. Besides, Tina knew the island well, and so at her behest their group made their way to one of the less fashionable beaches- Runaway Beach to be precise. 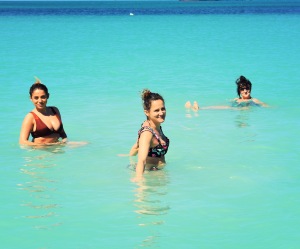 They ran away from the three and a half thousand passengers aboard the ‘Britannia’ and found paradise – at a price.

They swayed beneath the palms as buckets of local beer made their way mysteriously towards their expensive parasol. Paul knew that Andrew probably had something to do with the alcohol on tap, but he wasn’t complaining – it was such fun. Suffice to say it was a liquid lunch. 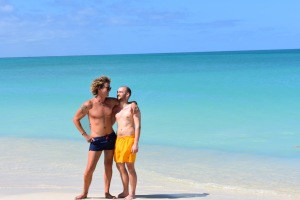 Grace, being Grace, immediately caught the attention of a young life guard. In fact Paul’s attention had been pricked initially, after he spotted the handsome, smiling native lurking at his stern earlier in the day. It was more than obvious he had an interest in his beautiful niece, and it was more than obvious Paul was more interested in the lovely Travis than she was.

He was terribly sexy, despite the fact that he found it necessary to wear knee length black socks in 30 degrees. A rather dubious look Paul thought. But who was he to judge. He’d packed some rather dubious outfits himself, much to the chagrin of his husband. Bugger it he had thought. We have 23kg each and we’re not carrying backpacks for once.

He was gonna dress to distress when he had the chance.

On the beach his mother had the time of her life. Floating in limbo in the crystal clear waters, her current age receding like a spring tide. It was wonderful to watch. Paul could not comprehend that she would be seventy in a few days. His own vanity made him not believe it. After all, if she were to be that old, what did that make him? It was quite hideous.

He had visited Tina in Antigua many Caribbean moons ago. He had stayed for a whole month and had fallen, like her, in love with the island in the sun.

He had a clear image of Tina collecting him from the airport back then. She had appeared driving an open jeep and wearing a sun-hat – it was all terribly Meryl Streep.

He had just finished ‘Little Shop Of Horrors’ at Leicester Haymarket and had been offered the part of Benjamin in ‘Seven Brides For Seven Brothers’, so he had a little time to ‘rest’ before retreading the boards.

It was his first time in the tropics and he’d been so impressed with Tina’s driving skills, not to mention the driving rain and the bath-like ocean.

He had lived in Australia previously, but had few memories. Probably quite a good thing as his parents had emigrated as ‘ten-pound Pommies’ to Sydney, cruising all the way. His father had apparently walked the handrail on the promenade deck whilst crossing the Indian Ocean. He had been cheered on by a drunken mob who clapped and sang ‘Hava Naguila’. Paul was glad he had no memory of that performance. His knew his mother must have been terrified. His father had had a terrible habit of going overboard, luckily this was not one of those occasions. Although there were many to follow in later life.

The day on the beach went swimmingly and as it neared completion Travis, the lifeguard, with whom some of the family had shared a herbal cigarette, admitted that he found Grace smokin’! He approached Paul and asked if she would mind having a picture with her for his Instagram account.

‘It be good for her, and good for me’ he had sung sexily in his lilting Antiguan accent.

‘I’ll have a word’ Paul assured him. Knowing that these young ‘grammers’ never resisted the opportunity to raise their profile. Grace had a highly successful Instagram account, having many more followers than ‘The Lola Boys’ tawdry affair.

Gracie reluctantly agreed. And a photo shoot, directed by Paul, took place on the beach just before the taxi arrived to take them back to the capital of St Johns.

It had all seemed terribly innocent to Paul as he snapped away. Directing his models to turn this way and that.

‘I think take the tee-shirt off Travis’ he’d heard himself saying far too lasciviously.

‘It’ll be so much better for the picture’, he lied.

Travis, of course, readily complied. In fact he couldn’t wait to show off his six-pack and the equally impressive ivory he sported in his mouth.

It was only on route back to the ship that Grace told them all that Travis had not quite behaved as the gentleman he purported to be. He had apparently been whispering unsweetened nothings in her ear as Paul had clicked away. Grace had handled the situation with balls whilst wanting to kick Travis in his. But she did not want to make him feel daft. And also, Paul knew, wanted a good shot for her Instagram account- @ Grace Owers.

When she discovered Travis had just twenty-four followers she realised she needn’t have bothered.

On route back to the ship, Tina asked the driver to stop at the pottery at which her artistic life had first wheeled into action. Initially it seemed that the place didn’t exist anymore – then all at once the little blue and white house in which she had once lived came into view. Paul recognised the charming little cottage too and both of them shared a poignant moment. They were suddenly in their early twenties again and the tears flowed – lachrymose lager streaked their cheeks with a golden hue. Paul knew that Tina had spent a special time on the island. Both brilliant and tragic, and he knew her memories must have bitten hard – it had been incredibly moving for the whole family.

As they made their way back to the ship the whole family reminisced and talked of the fantastic day they had shared together. Then out of the Caribbean blue Grace turned to Paul and said with a just a hint of irony,

‘I can’t believe he only had twenty-four followers!’

Paul knew that life could be a bitch sometimes. Or rather – a beach!

But what a beach!