It was the 29th of January. The day of Paul’s sister Tina’s birth. She was forty-something and the boat docked on the Dutch side of the beautiful island of St. Maarten.

The family made their way to ‘The Peninsula’ restaurant in the bowels of the ship for a birthday breakfast.

It was no mean feat.

The ‘Britannia’ was not easy to navigate. Whoever had designed her had made it quite impossible to go from front to back and side to side in a logical manner – it gave one irritable bowel syndrome when trying to make even the simplest of journeys.

The ‘Britannia’s’ lifts didn’t help either – they had a mind all of their own. Paul thought he might do better in Ronald Dahl’s Great Glass Elevator – at least he knew he’d travel in the right direction and it had more chance of turning up!

When the family eventually assembled at table, Tina opened her cards as they ate a cold fry-up amongst the miserable staff. It was the second time they had eaten breakfast in the restaurant and they all decided it would be the last. Although Paul loathed a buffet, even he thought it would be preferable to negotiate the hungry hoards than attempt to charm the stern waiters on the back of the ship.

They seemed most unhappy. Quite unlike the staff in any of the other parts of ‘Britannia’ in which they had dined.

It was obviously the job not to have!

Perhaps, Paul thought, one was put on deck five as a punishment, he for one, wouldn’t be going again. It lead to indigestion and a terrible gut feeling that the waiters were not treated that well. Or why else would they take their dissatisfaction out on their punters?

It left a very bad taste in the mouth.

From now on they’d risk the ‘Horizon Buffet’ – it may broaden their waistlines, but their appetite for rude service down below had been more than sated.

Tina’s birthday shower began with a rainstorm of tropical proportions. There was simply nothing to do but take cover under and umbrella and drink the local ale. 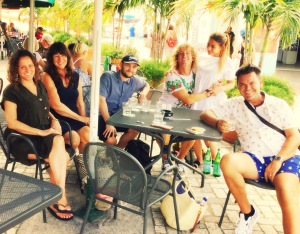 When the inclement weather eventually dissipated the motley crew made their way to the capital Phillipsburg and trundled along the promenade; the sun now fully in command of the watch.

They were feeling hot, hot, hot.

For lunch they found a little Mexican establishment which mixed Margaritas of such ferocity that old Father Time became a little confused as to the hour of embarkation. 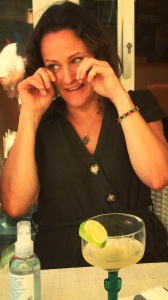 They all arrived back at the ship panicked and an hour earlier than need be.  Still, the brisk stroll had at least burnt a few of the nautical calories which they’d been ingesting onboard.

Paul had lost a stone over the last couple of months in preparation for the marathon eating session that was known as cruising. He knew from past experience that a few visits to the ship’s gym and the odd power walk around the promenade deck would not make up for the greed one usually succumbed to whilst onboard. With menus that read like a gastronomic Booker Prize novel, he had already booked his diet for his return from sea. He had no intention of curbing his appetite whilst onboard – it would be a waste of the epical epicurean experience ‘Britannia’ offered.

Other than in the shitty ‘Peninsula’ restaurant of course.

After the excitement of the day they hit the sail away party, which was a rather muted affair, thanks mostly to the weather which had now closed in again. Paul only hoped it would brighten up overnight, as he was known to get quite seasick even with conditions flatter than the calmest millpond. An irony seeing as seafaring was one of his favourite pastimes. Still, he knew he shared the talent to vomit at the drop of a cap with Admiral Nelson. So considered himself to be in good ship’s company!

Luckily life on the ocean waves proved to be calm and the ship headed south towards the ‘Nature Island’ of Dominica.

After all the birthday excitement a sea day was just what the family needed.

Paul and his mother rose before dawn’s crack and performed that very Teutonic practice of grabbing a sun- lounger pre- breakfast. They did not, however, clip their towels to the chairs with the giant plastic pegs which were ubiquitous on their vessel. Instead they sat and waited to be joined by Tina and Grace, casually throwing the odd flip-flop and a dodgy book from the ship’s library across the extra beds they had reserved.

Other passengers were not so considerate.

They’d obviously cruised before and had it all pegged. They would just clip their towels over their desired position and bugger straight off to brekkie. Despite many announcements from the Captain to desist in such mutinous behaviour the ship’s company didn’t take a blind bit of notice. Paul thought some of the other cruisers quite selfish and wondered if the ancient naval art of keel-hauling shouldn’t be employed in order to dissuade them.

There was one particular family who were quite over keen on the buffet who would obviously need bigger ropes attached to them for this practice …. 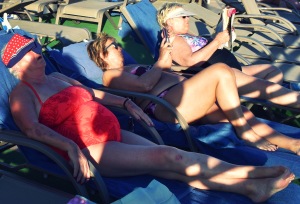 But it could definitely be done.

Or perhaps a little walk of the plank, Paul mused, as he looked towards a scurvy Irish couple who had just returned from a two-hour sojourn in the dining room.

He just hoped the ship didn’t go down, as the ill manners shown by a significant number on the boat made abandoning the ship with any dignity very unlikely. Paul imagined some of them had already pegged out their seats in the lifeboat – the ones with the best view!

The sky was azure and the ocean cerulean as they steamed toward Dominica and there was little to do aboard but navel gaze.

Well, this wasn’t quite true, there was a full ship’s programme, but they were all fairly exhausted, so sunning oneself with a cocktail around one of the ship’s pools suited Paul perfectly.

Even Andrew’s hunger for deck activity had waned and he confined himself to his cabin for most of the day. This pleased Paul, who knew if his partner’s mania continued unabated he would have no option but to deck him himself.

Another Pina Colada. Another odd buffet lunch. Salmon fish cakes, beef madras and and a stea’ and kidney pie!