Andrew woke before the rest of the family and made his way towards the gym via the smoking deck and the coffee machine.

By the time the rest of the gang met up with him he was higher than Daniella Westbrook on a night in!

The rest of them were lagging behind somewhat – Paul was most definitely not yet on ship’s time. His mother was in a slight daze. Tina had yet to cast off the flight and Bill’s brilliant brain, which had won him a top notch maths degree at King’s College, was completely tied up in nautical knots. It was only Grace who seemed to be able to navigate the ships endless corridors. Infinite gangways which made Hampton Court’s famous maze look like child’s play.

Paul knew, all too well, his bow from his stern after two many years at nautical school, but at present he couldn’t tell his aft from his midships!

As the Britannia sailed on a north westerly heading away from St Lucia and towards Antigua, there was nothing to do but relax. The family found sun beds on the top deck and began topping up their tan. 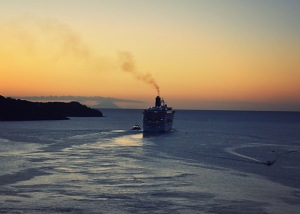 They were quite incapable of anything else.

Other than Andrew that is.

Who, before the ship rang her six bells had already knocked eight bells out of her entertainment programme. By mid afternoon, he’d line danced, sat halfway through a dodgy cabaret and come second in a shuffleboard competition. He also had a go at quoits, acting like a bit of a tosser and finishing last.

But then he’d never been one for a quoit!

He was literally high on the high seas. 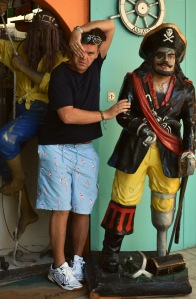 Paul knew that this wave of enthusiasm would probably come crashing down and that his husband would no doubt have to confine himself to his cabin for a few hours. But before that Paul knew there was a ‘boat building competition’, ‘adult football’, and a fashion show on offer, so he doubted Andrew would run aground just yet.

As it was Andrew eschewed the aforementioned fashion show. Mercifully thought Paul, as he, his mother and Tina perched on bar stools watching the superannuated passengers who had volunteered to model, stagger around the ships atrium in stilettos and Ralph Lauren. He could only imagine Mr Lauren spinning in his grave as this group of misfits made sure nobody spectating would ever dream of buying any of the outfits. 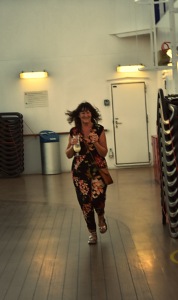 Paul could not look at his sister for fear of growing hysterical. The only thing that could make it more extraordinary was if Andrew hit the catwalk in a little black dress and a pair of Jimmy Choos.

And he wasn’t writing that off quite yet!

Dinner was a fabulous affair and afterwards the family drank cocktails on deck before Paul bullied them all into going to see the magic show in the impressive ‘Headliner’s Theatre’.

Grace managed to escape as Paul had a quick visit to the little boy’s room, and made hastily for her cabin on G deck. She’d obviously had some magical foresight. For the show, entitled ‘Astonishing’, was only that because it was astonishing that P & O had the nerve to put it on in the first place. It consisted of the same trick done badly about fourteen times using fifteen dancers. 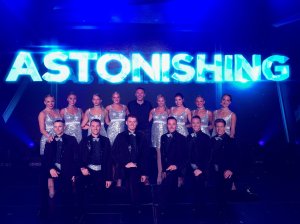 There was no a magician to be seen, let alone disappear.

As a couple from Northern Ireland had a blazing row next to them during trick number thirteen, their antics became far more interesting as the irate husband did a genuine disappearing act and left his wife alone and gin soaked for the finale.

Andrew followed suit and made his escape, along with a few choice comments, a la Harry Houdini. There was a casino tournament to join after all, followed by a Samba class.

Paul turned to Tina inside the ‘Headliner’s Theatre’ and the hysteria began to re-surface.

When the rest of the family eventually made their exit stage left and met with him outside the theatre they all agreed on one thing.

The show had certainly been fucking astonishing! 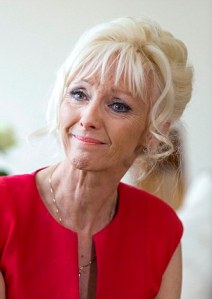 Debbie McGee would have been disgusted!

When they recounted the tale to Grace the following day she was quite sorry she had missed the spectacle.

So, hey presto, they all made plans to be astonished the following week. It was far too bad to miss!

Their first day onboard the Britannia had been almost magical.