After nearly three months of imbibing copious amounts of fruit and vegetable pulp, via the ubiquitous ‘Nutribullet’,  this fractious fast Andrew and I have undertaken, seems to be taking its toll!

It’s not easy being green !

Our skin may be aglow and our organs awash with healthy enzymes and free radicals, but neither of us are feeling radically free.

If anything we’re both feeling slightly imprisoned by the damn machine and it’s righteously, rigorous regime.

I’m almost becoming anti-oxidant!  And up ’til now I’ve never been anti – anything!

Another week of this and we could morph into an extremely healthy ‘Burton And Taylor’ – ferociously flinging  gone – off bananas at one another.

Jaundiced, juicy,  javelins flying through the air, aiming to kill, or at least, maim!

All terribly ‘Kiss Me Kate’ or rather, ‘Kiss Me Kumquat!’ 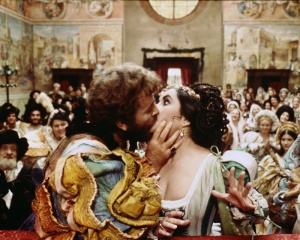 This sound and healthy lifestyle can make for a very unsound and unhealthy relationship.

A banana split could be on the menu!

God Thank Pomona  that we have our own, more fruitful diversions, to provide us with diversion from fruit!

Plus, we are both in possession of a terrible aim. Therefore,  any pineapples, mangoes and coconuts that have taken flight, have, thankfully, all missed their intended targets!

I have never excelled at any sport requiring me to throw anything spherical.

Even as a child, when visiting Putney fair, and the cry of ‘ roll up, roll up, penny a pitch’ was heard, I was rarely at the head of the queue.

I always allowed my father that honour I’m not shy to admit, it was one of the few things he could always do better than me.

Even if ‘a bunch of coconuts’ did seem, inwardly, very appealing to me at the time, there was no way I could have given the game away at  this early stage of my development.

Dad would have been so disappointed.

Besides which, the whole process seemed like so much hard work.

A load of strenuous manual effort only to be rewarded with a couple of hairy nuts at the finish – and that was if you got lucky!

I have, of course, during adulthood, improved at such ball-sport, and have since visited quite a number of not too dissimilar ‘sideshows’ . Only with a far greater success rate!

Though I doubt whether my old man would  totally approve of the technical prowess I am now able to call upon during such physical undertakings – even though I’m usually a winner every time.

But then fathers can be notoriously difficult to please.  Even when they’re dead!

As can LIVING partners!

Which brings me back to our current shaky position  –  no doubt caused by our constant current of shakes….

To ease the friction created by our almost saintly diet, we have both de-camped (well almost!)

Andrew has taken brush to easel and has been creating some masterful strokes on canvas.

Cloistered in his studio, with only ‘San Miguel’ for religious and artistic support, he has managed to go where no brush has gone before and immortalise the crew of ‘Star Trek’ in his own artship enterprise.

The voyage is not yet over – but he’s definitely hit warp-speed!

He  has also been finding turpentine turpitude in the films of Quentin Tarantino. Colourfully inspired, he has skilfully managed to evoke some of the drama and glamour of recent Hollywood, bringing icons like John Travolta and Uma Thurman to  life in glorious technicolour –

or to be more correct –  acrylic!

I, too, have taken inspiration from the silver screen, albeit from a slightly different era, and have been reclusively performing old show tunes at the piano forte – to an audience of one.

In fact, the only thing I haven’t done is ‘written a letter to dad

‘Dear daddy, you will be pleased to hear that at last I actually do have a lovely bunch of coconuts all of my own and  I am very grateful to you for teaching me the art of ……’

As you can tell – I’m feeling nutty as a fruit bat!  Or have I cakes in my belfry?

Bette has nothing on me !!!

But, despite the growing nuttiness,  Andrew and I are set to continue with this regimen of greens, greens and yet more greens, until we reach the bitter end.

After all, the fancy blender cost a ‘figgin’ fortune, AND added to the supposed health benefits,  its  ‘berrified bumff’  promises us we’ll look five years younger by the time we finish the suggested diet.

The manufacturers are obviously aiming it at the gay market.  You only have to look at the shape they came up with.

A fruit blender for every blend of fruit!

You can almost hear ‘John Lewis’ counting  their pink pounds as thousands of these little mincing machines fly off the shelves !

At present though,  I must admit, I am  feeling  no difference whatsoever.

I am sure that Carmen Miranda must have felt fruitier than me, and her melons  were made of pla

I do hope the reputed,horticultural, happy hormones kick in sooner rather than later,  or there could be trouble at mill.

Andrew and I are already spitting pumpkin seeds – we are almost ready to kill.

Yes – There could even be murder!

Or at the very least  –  ‘Melonslaughter!’

And one thing’s for sure  –  it certainly won’t be Professor Plum whodunnit with the lead piping.

It’ll be an open and shut case.

A pure and simple –  ‘Crime Of Passionfruit!’