We’ve arrived in Pai – a little ‘Pai -Eyed’ and not so bushy tailed!

The Driver; four hours of hairpin bends at break-neck speed; gear-  manouvering worthy of Mr Magoo; and the heaviest brake pedalling I have ever witnessed:

At the forty- seventh bend I knocked into this wonderfully serene senior monk reading his newspaper – elbowing him hard in the face. – for the second time.

A moment that gives the phrase ‘Bashing The  Bishop’ a whole new meaning.

And, ‘a la Rosa Parks,’ we were made to sit at the back of the bus! Trapped between  two young lovers batting for ‘Our’ team, if you catch my drift.

I would love to say it was the first time I’ve been squashed between three homos on the back- seat… But let’s not  go into that.
There was at least some respite – a brief ‘Pits’ Stop!’ 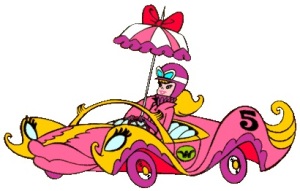 Penelope would certainly not have approved – the khazies were kamikaze!

Mercifully, we have now reached our destination of Pai. Both still swaying from side to side as though we’ve just disembarked from a dodgy cruise.

I guess we just haven’t found our ‘Charabanc Legs’ yet!