The Show Must Go On !

The Lola Boys had quite often played to a spaced out crowd. But by any measure, that was usually down to the Spanish kind, measures that is, not for lack of an audience. Now with social distancing looking to be the norm into the near distance, anybody sitting too near a distance was a no no! Also any performers treading the boards had to do so at least two metres apart.

What a bloody performance!

Paul was worried it could be the end of theatre as they knew it. He hoped he was being a touch dramatic. After all, ever since Thespis had stepped out of the ancient Greek chorus to give his solo, show business had survived. Plagues, wars, the censors! The performing arts had always found a way to perform. So a little bit of ‘Corona’ wasn’t gonna bring the curtain down. Paul was almost certain that once again the tabs would be raised on he and Andrew’s industry.

He just wasn’t sure when that curtain call would come.

They certainly were edge of the seat times. Who knew when the dress circle would open once again? T’was in the lap of the gods. And they were playing silly buggers at the moment starring in a right old farce. He only hoped he and Andrew could last out until those on high had taken their final bow, and he and his partner were able to slip back into a feather boa and belt out a few show tunes.

He knew they were much more fortunate than some. They had each other, which was sometimes a blessing, and they had a loyal fan base who they hoped were waiting in the wings to come and rejoin them when the viral madness was over.

And over it soon would be. Surely.  Paul was nothing if not an optimist. The house was always half full in his mind. Even if, at some of The Lola Boys earlier shows, he and Andrew had played to just two nuns and a whippet, in his mind he was always appearing at The London Palladium – and there wasn’t a seat to be had. Tragically, he was well aware that that most auspicious of venues was remaining closed for the foreseeable future. He’d also just learnt the UK’s panto season had been cancelled.

Oh no it hadn’t’. Oh yes it had! The seasonal staple was now definitely well and truly behind them. Paul thought it so sad that most kids first visit to the theatre had now gone up in a puff of Corona. The evil genie had been let out of Wuhan and now you see it – now you won’t. What evil sorcery.

Of course, the show must go on – only how could it? The famous lyric,’There’s no business like show business’, couldn’t have been more pertinent. There was no show business.. And there were no people like show people as most had been cast onto the proverbial scrapheap. Upstaged by a bowl of oriental bat shit and banished offstage due to a penchant for pangolin instead of pantomime.

It was a real tragedy.

Still. There was a glint of a happy ending. The pubs were re-opening.

Paul and Andrew had missed the odd pitstop during their usual power walks around Brighton. It hadn’t been the same crouching in a back alley with a can of ‘Stella’ and a bottle of hand sanitiser. Although it wasn’t the first time they’d done that even before Covid 19 took hold. But it wasn’t as comfortable as sitting in a snug with a bag of pork scratchings chewing the fat with some theatrical company.

Paul wasn’t sure he’d be rushing to his local though, just in case a local case was doing the rounds as he was buying one.

He didn’t fancy finding out his pint had been spiked with a sudden spike.

Although he missed the revelry and camaraderie a good inn could provide, a great atmosphere could often prove infectious. He was no coward. But nor was he that desperate for a piss up in public. Or a public piss come to that. He hated urinals at the best of times, but peeing during a pandemic had already proved most irritating. He’d found himself caught short in some very inconvenient spots. At one stage having to squat precariously between two narrowly parked cars in broad daylight, as there were no public conveniences open.

But he’d had no choice, and at least he chosen the gap between a BMW and a Mercedes. It had been a latrine of formula one status – and he’d urinated in a highly teutonic manner. Effectively and with immaculate aim. No bodywork had been corroded in the process, only his ego.

But it didn’t mask the fact that they were living through strange times, Paul knew he would find it a relief when he could relieve himself in the usual manner. i.e. In private.

Until then, it was any Porsche in a storm!

He and Andrew had just been given the green light to purchase flights back to Spain. They were due to arrive almost six months to the day that they’d flown off into the eastern sunset, blithely unaware they would be quarantined as the sun rose on a world which had turned viral. They knew their pooch Lola would be thrilled to see them return. 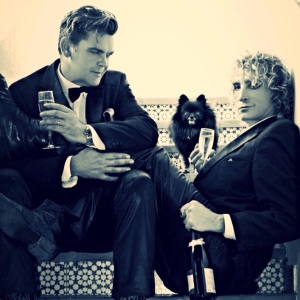 They weren’t so sure about some of the other bitches who’d already begun kicking off on social media.

“Keep the Brits out until they’re clean’, was one of the headlines he’d come across in one of the local online rags, which purported to be purveyors of news on the Costa Del Sol.

‘We Don’t Want ‘Em Back ‘Ere’ read another. Written, no doubt, by one of those cheap ex-pat types who sit in ‘Spanish’ bars ruining their livers and lungs and transplanting themselves, at the first opportunity, back to the UK to get the NHS to replace them.

He doubted many business owners felt the same way, realising a little oxygen was required to resuscitate their suffocating tourism industry. Many of the tawdry bars these bitter British folk frequented, as they sat on top of one another socially distancing their country of origin, would doubtless have to close up if they didn’t get some lifeline. Their paltry contribution to ‘Happy Hour’ wasn’t gonna cut the mustard. Even if it was English. It would be ‘Last Orders’!

Paul knew he shouldn’t vent his spleen, but was sure he could be forgiven partaking of some ventilation during Covid 19.

Everybody was at it after all.

But, welcome or not, he and Andrew were determined to return to the life they had created.

They’d booked their seats. The show, for them, would definitely go on.

Even if the stage door was locked.

After all, they had tickets!