So! The escape plan from the small Philippine island had failed miserably. Mainly due to the miserable consulate who had decided not to get in contact with Andrew and Paul, this despite the fact that the boys had handed over two grand for the privilege of an emergency repatriation flight.

The plane was to fly them to Manila first, and then they were due to switch aircraft and make headway towards Heathrow.

Unfortunately the plan didn’t take off!

On the morning of their intended great escape, the boys headed into San Francisco, the capital of Pacijan, the island in the western Pacific which was now their temporary home. Masked up and with Andrew laying low in the back of the car, they made for the town hall. There was only one quarantine pass per household, and this happened to be in Paul’s name. So Andrew wasn’t really allowed to go out onto the street. Paul thought this a sensible option, even in more ordinary times, but kept it to himself. There had already been a couple of beers ‘spilt’ in anger – the isolation mixed with with the iced hydration had not done either of them any favours. Although they loved each other very much, sometimes one could have enough of hunkering down together. Love could be suffocating too!

The town hall was quiet. It’s small contingent of civil servants tapped away behind their desks behind their masks as if life were completely normal. Apart from the fact everybody looked like a bank robber.

It was most surreal.

Tess, the wonderful girl from their resort, who had driven them to the capital, did most of the talking. Paul was pleased. As his face covering seemed to be thicker than most and even with his drama school training he was finding it difficult to be understood. Andrew, conversely, with his ‘end of the pier’ training, was having an easier time of it. Paul put this down to his partners lack of chest resonance and the fact that he was wearing an old black bandana, as his ‘mask’ had fortunately gone missing. He appeared most glamorous, his aquamarine eyes shining out with intensity as he looked as if he could say ‘stick ‘em up’ at any moment! There was a touch of an old ‘western’ about him. Whereas Paul looked like everything had gone completely south. He thanked Allah he hadn’t been born a woman in Afghanistan – he just didn’t have the eyes for a burka.

Not without a heavy touch of guyliner!

Andrew left Paul in the municipal building to go in search of beer. Paul knew this to be a bad move. He was well aware his partner had no permission to go out shopping and even less capacity to deal with the strong ‘Red Horse’ lager which was on offer. At seven percent alcohol it usually made the horse bolt, and Andrew was never that stable at the best of times. When he arrived back, two bottles in tow, he was swiftly reminded that he could not drink in public.

‘Come with me’, said Tess quickly, and flung Andrew into the back of a van owned by the lovely manageress Marjorie and her intended, the gentle Charles, who just happened to be in town at the same moment,

‘You can drink in there’. She laughed, but Paul had the distinct feeling she thought they were both alcoholics. Maybe she had a point. But they were living through strange times. Even the ‘Grand National’ had been cancelled.

And he hadn’t bought the ‘Red Horse’!

She knew the right people right?

And that seemed to be all that mattered in The Philippines. Within hours Paul and Andrew had been granted a travel pass allowing both of them to leave the island. This was not the case for anyone else, so she had obviously pulled on the strings that were needed fairly hard.

Tess was a marvel.

In fact, the whole family who were taking care of them in their small resort were utterly charming. Even though they must have been scared and insecure they tried not to show it to their ten guests. And if they were bothered by the reality, they were now in peak season and under curfew with hardly any income, they certainly did not let on. They were the kind of passengers one needed on the ‘Titanic’. Proud and full of natural joy.

Paul would have been happy to share a lifeboat with any of them.

It had been mooted that their resort was soon to be turned into a quarantine facility, even this, fairly shocking news, did nothing to dampen the family’s spirits.

Instead they worshipped the Holy Spirit, and visited each makeshift station of the cross on Good Friday, with prayers and hope. Paul watched the little group as they moved from the empty reception towards the small pool and then on to the restaurant. It was all terribly Catholic – but there was nothing terrible about it, despite his lack of faith. The familial spirit was alive.

There was a word in Filipino he had learnt. ‘Barangay’. It meant village. But it was also synonymous with looking after one another. Be it during a tsunami, volcano or earthquake.

The folklore was that people looked after their folk – it wasn’t law – just how the folk rolled.

The resort had purchased rice for every one of their workers who had been laid off during the Corona crisis. The hotel served as a distribution point for the community. There was still a grain of kindness in the world. Paul and Andrew were most moved. 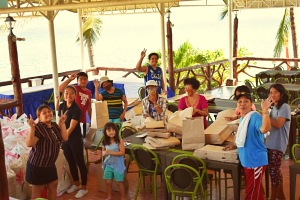 However, they did not move!

After successfully receiving their ‘escape passes’ they then sped to the port. They learnt that there were no boats leaving the island so their only hope was to take the cargo ship.

Strange cargo that they were – but Tess assured them they could be transported, as long as they visited the coastguard.

They whizzed along a small lane and came across several men in very tight uniforms. A guard dog span and barked ferociously in his cage at the intrusion. The young seaman were eating their lunch and laughing with each other. They were not at all fazed by the two gringos who had just rolled up. They said there would be no problem with the boys taking the cargo vessel over to Cebu, they did, however, require that they made a contribution to their meal. The boys did so readily, both aware, there was no such thing as a free lunch.

Especially when it paid for a free passage.

They galloped back to the resort and cracked open another bottle of ‘Red Horse’ in celebration. All they had to do now was wait for the flight number to come through and organise a car to take them from the port to the airport once they’d docked.

Each of the calls he made were fruitless.

The person on the other end of the phone informed them that either they did not have permission to pass through the armed checkpoints or that they could not book a car without a flight number. The latter had still not materialised from the consulate.

And the embassy  were not answering their phone. Not even the emergency number, there in case a citizen was being ‘attacked, mugged or murdered!’

As Paul and Andrew watched the clock tick away they had a suspicion their number was already up.

They were going nowhere.

Paul woke the next day at 4.30am. He managed to get online to check if the Embassy had sent any more information.

He needn’t have bothered.

He watched the sun rise and imagined the rescue flight, for which they had coughed up heavily, take off.

It all seemed rather hopeless for a moment.

But then he remembered, he and Andrew were marooned on an island with such beautiful people. There were worse situations in which one could find oneself.

And they had contacts!

It was getting more ‘Tintin’ by the minute. And Paul had his very own Captain Haddock snoring right next to him. As he looked at Andrew’s handsome face he knew they would both be fine.

They had each other after all. 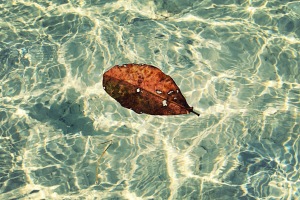 They would roll with the tide.