The flat little island of Bonaire proved to be a delightful surprise. 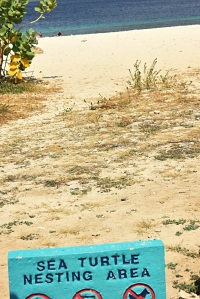 The touting and conning ubiquitous to most of the ports so far was obviously in evidence. The family was quoted the price of a small car to take a tour of the tiny island and less than politely refused. They were alive to the rip off merchants and tore into them for their unjustified behaviour – Andrew especially. Telling one taxi driver he could buy his car a new engine for the price he’d quoted to take them to see a couple of flamingos and a salt flat!

The would be driver was not amused.

None of the family cared.

They’d discovered that away from the ports the Caribbean was an altogether friendlier place. But whilst near the ship it was drive away or be driven off. At a price!

They all realised the good island folk needed to make money, but mafia style price-fixing was unnecessary, and rudeness, quite uncalled for. Paul knew they were now anchored just off of the coast of Venezuela but that was no excuse to behave with such undemocratic con merchantry like the almost incumbent government of that unfortunate country.

As they argued with a friendly lady in the official tourist office, who assured them that Bonaire was the cheapest of the ‘ABC’ islands, (Linda’s crew all knew their ABC and were aware she was having them on), a friendly American came forward and whispered in their ear explaining that the family could walk to see the famous, leggy pink birds.

He said it would take about fifteen minutes and save them one hundred and twenty-five dollars.

They thanked him profusely and set off on route, quite in the pink what with the small fortune they’d just saved. They were off hot-foot, to visit the famous avian inhabitants of Bonaire. Apparently!

After a short argument at a deserted road junction under a blisteringly hot sky, Andrew insisted they take a right. Paul thought him wrong, knowing Andrew’s geographic skills to be highly debatable, and plumped for a left. Their feet were more than hot now as the sun reigned her equatorial rays right royally down on the six gringos on the look out for flamingos.

Paul thought he may go slightly hysterical as he surveyed the barren landscape. He had always suffered from a ‘Lawrence Of Arabia’ fantasy. In which he, as Peter O’Toole obviously, would be discovered half dead, desiccated amid dunes, by a mustachioed Egyptian in Arab Black silk robes coming from a long way off.

He knew it was a long shot.

He blamed his mother. She’d always dreamt of an Omar Sharif to come along and rescue her. Sheltering her from life’s sandstorms in deserted bliss. Safely hareemed amid his billowing robes and a pack of camel.

But he kept it to himself.

There was no room for his morbid fantasy as they sweated their way along the road surrounded only by salt flats and the odd speeding jalopy.

Paul thought he saw one of the pink bird like things in the distance. Everyone stopped and scoured the heat haze of a horizon.

It had been a mere mirage.

After trekking a little further the clan heard a vehicle pull up beside them and a familiar voice call ‘ahoy’. It was Doug, the American who had provided them with their itinerary earlier that day.

‘Hop in guys’ he said, ‘I’ll take you there. My wife says it’s a little further than I made it sound’.

Apparently the birds Doug had recommended had de-camped and decided to set up nest somewhere else. They flew apparently. Who knew?

The family jumped into Doug’s roomy four by four and made their way south hoping to pick up some birds on route.

Doug hailed from Ohio, he wintered in Phoenix, Arizona, and in just ten minutes he had restored Paul’s faith in his American cousins. Doug was polite, fun and self effacing. He had no agenda, just a duty, he felt, to show the best of Bonaire.

He dropped them near to the airport to where a flock of pink flying machines had made landing.

After the group had got their shots Doug generously offered to drop them at one of the less touristed beaches. Nothing but coral and a beached van which sold beer and local food.

It’s owner was quite a catch of the day himself. 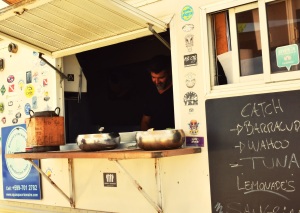 Both Grace and Paul voiced their approval – Grace said she’d fallen into his eyes. Paul’s gaze had fallen a touch lower.

Each to their own he’d thought.

He so loved a good chin!

The family spent some time shacked up with a few beers and plate of tuna three- ways! Each proving to Paul that he really only enjoyed that fish one way.

But, he maintained, when one is in Bonaire it’s always worth having a flamin’go!

The gang walked along the salt flats back to town. A taxi had been the desired choice of the ladies but their were none to be had. So a sweaty hike along the road was the only route back to the port.

On arrival they hit a bar run by a most effusive Dutch couple.

Paul and Andrew had many Dutch friends and knew that those hailing from that no-nonsense country were generally open and non-judgmental. There seemed to be no difference in the Dutch Antilles.

The atmosphere was most gay.

Even the gift shops differed from those in the rest of the Caribbean. Paul doubted he would have found a statuesque merman draped in a rainbow flag in Barbadross.

He decided he liked Bonaire.

The ship let go her lines at 17.30 and the Britannia made headway in a westerly direction towards Aruba – the closest the she would get to the South American continent.

Paul could sense a samba coming on.

Ironically his ship’s company began with a ‘Can Can’. Well the three of them that still ‘could, could’ at least.

After late night cocktails in he and Andrew’s cabin, Paul, and his mother introduced Gracie May to the delights of the inimitable Shirley MacLaine. They watched the old movie ‘Can Can’ on the ship’s tv, as Andrew lay in bed doing the ‘Can’t Can’t’!

He was most patient as the film took several hours to watch, with pauses for Linda to teach her grand-daughter the more intricate steps of the naughty French dance.

And Grace and Paul sharing the odd illicit fag on their verandah.

When Paul eventually bid them bon matin the Can Can Girls kicked their way messily aft along G deck and almost towards bed.

South America in the morning.