One of Paul’s favourite films had always been ‘Who’s Afraid Of Virginia Woolf’, starring the inimitable Elizabeth Taylor and her then husband Richard Burton. Paul had no idea that years after seeing that masterpiece he and his husband would be giving a frighteningly similar ‘tour de force’ on a shabby Bangkok rooftop at midnight.

Unfortunately there were no ‘Oscars’ awarded for this performance. Which was probably quite a good thing, as Paul had held one once, and knew the things to be rather heavy.

It could easily have been ‘Death By Statuette’. So he knew he wanted to thank the Academy for not awarding him best performance by a bleeding actor.

The heat, the jet lag and the beer had all taken their toll and the show just happened to come to a head in an explosive finale at a dodgy hotel, come knocking shop, off the Khao San Road.

Thank Buddha nobody had noticed!

Despite the boys’ drama, the other guests had performances of their own to be getting on with, and at times even Paul’s wild rant was drowned out by the animalistic sounds coming from the rooms below. Although Paul knew he’d behaved rather like ‘The Beast Of Bangkok’ it obviously hadn’t bothered the other residents. They were doing something far too bestial to care.

When Paul awoke, groggy, grey and alone, he had a gut feeling he had been the one in the wrong.

At least by the end.

From what he could remember!

He recalled that Andrew had waved a couple of red flags, but it was he who had become bullish.  He looked at the one sad ruck sack splayed out on the floor and remembered the ruckus. He realised at once that Andrew had left him to stew.

As he stepped out onto the sizzling rooftop and the smouldering cauldron of polluted sky he began to do just that. His temperature rose sharply.

Andrew was no-where to be found.

The following day Paul sat at a shabby table at an old restaurant in the southern town of Hua Hin. He watched as a gaggle of fearless Thai boys jumped from a dilapidated fishing pier into the murky water below. He envied them their carefreeness. They had only just dipped their young soles into the ocean of life. To them every channel seemed swimmable. He knew he and Andrew had swum much further out into the deep. Now dangerously far from the shallow. Were they now out of their depth ? Paul hoped not, but recognised, after having spent several early years drowning at a strict naval school, that it was now sink or swim. He was almost sure he would not be able to reach the shore alone, and he was well aware that Andrew possessed only a limited ability to crawl. It didn’t look good.

Hua Hin, the southern town on the gulf of Thailand, had yet to impress Paul. Although the late and popular king had made his summer residence here Paul found it less than majestic.

To him it seemed quite an ordinary Thai town with far too many foreigners to have any authentic character. The townsfolk were friendly enough but the magnificent beach, though a natural beauty spot, had been sullied by overdevelopment. Much like an aged movie star after too much surgery. Liz Taylor leapt wolf-like into his mind once again.

Paul preferred a more bucolic beach. One where the budgies weren’t smuggled by the thousand!

A good friend in Spain held called Hua Hin, ‘Bangkok On Sea’. She had been correct. And as Bangkok was not herself the prettiest of damsels, it was no wonder this town was also in distress.

As were the giant jellyfish! 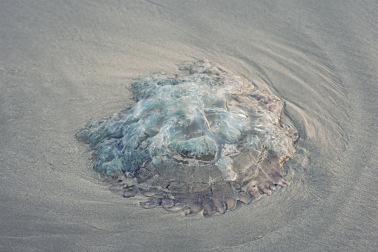 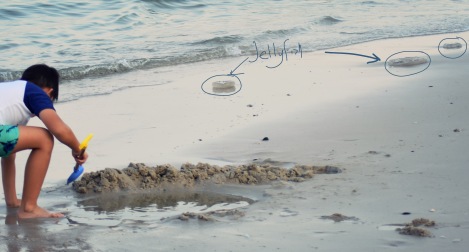 The dinner plate sized globules spattered the beach regularly like extra-terrestrial dung, turning a pleasant stroll into an alien assault course. What with all the creatures and the vendors it was all too easy to get stung. In fact Paul had learnt that,recently, several tourists had been hospitalised due to these little monsters – that is the sea life not the street life! 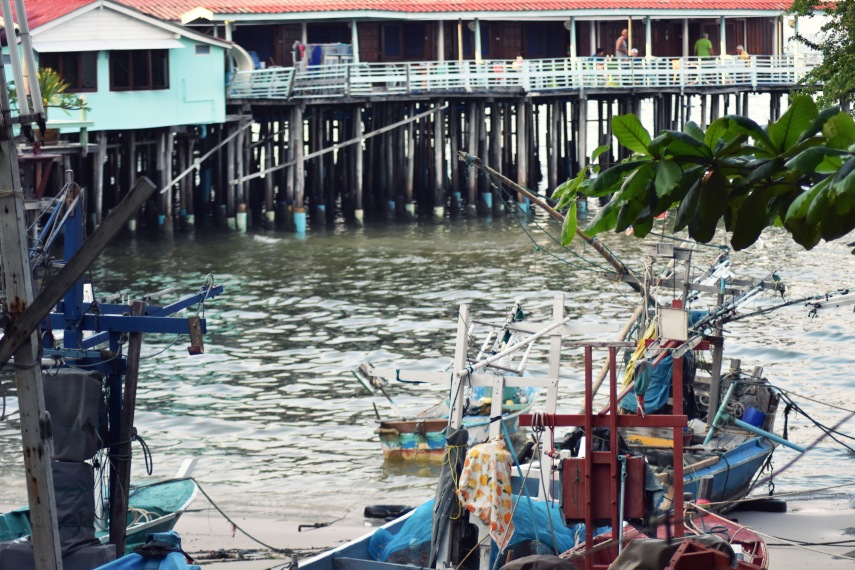 The original part of town, an almost pretty tangle of jetties and jetsam, where Paul was boarding, appeared to him the only neighbourhood of any true distinction. This district, unsurprisingly, was now being threatened with demolition to make way for high-rise, low taste settlements.

It was clear that pier pressure was being applied. 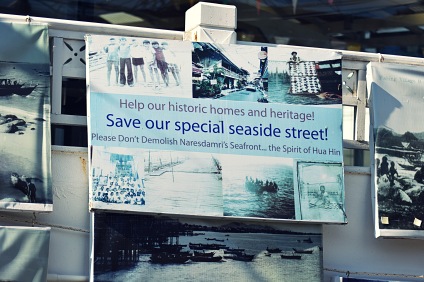 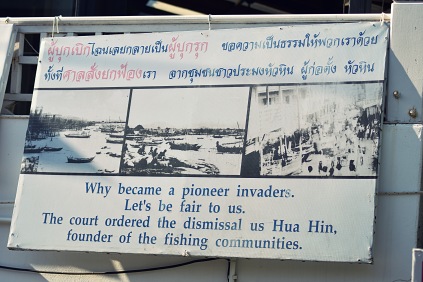 And Paul was fairly confident which side would win.

Paul could only hope it was fake news. Though he doubted he would ever return to find out.

As far as he was concerned it was ‘Hua Has Bin’!

Although the beach was more ‘Hua Din’ during the day, at dawn her chorus was definitely muted.

And he had found a part of town, away from the hustle and bustiers, that was actually Thai and rather charming. So perhaps he wouldn’t write the place off quite yet. Besides, he was hoping to bump into his fella.

The next evening, after another day on his lonesome,  Paul turned onto the small Soi running to the front of his guesthouse, parallel with the old seafront. This, with the intention of taking some photographs. To his shock, exactly as he turned the corner, there was Andrew.

Paul’s legs turned to jelly, just like the little marine monsters on the beach. He and his partner had had no contact since arriving in Hua Hin. Their double act had practically split up and neither were really sure if it would make a come back tour. But Paul hoped they had both been on the road long enough to overcome a few bumps and the odd puncture on route. They locked eyes for what seemed like an age. Paul suggested a drink – Andrew agreed.

They sat in a scruffy gaff with fabulous seafood overlooking the horrible ‘Hilton’, the ‘80s’ building which had spawned the spate of overdevelopment in Hua Hin. 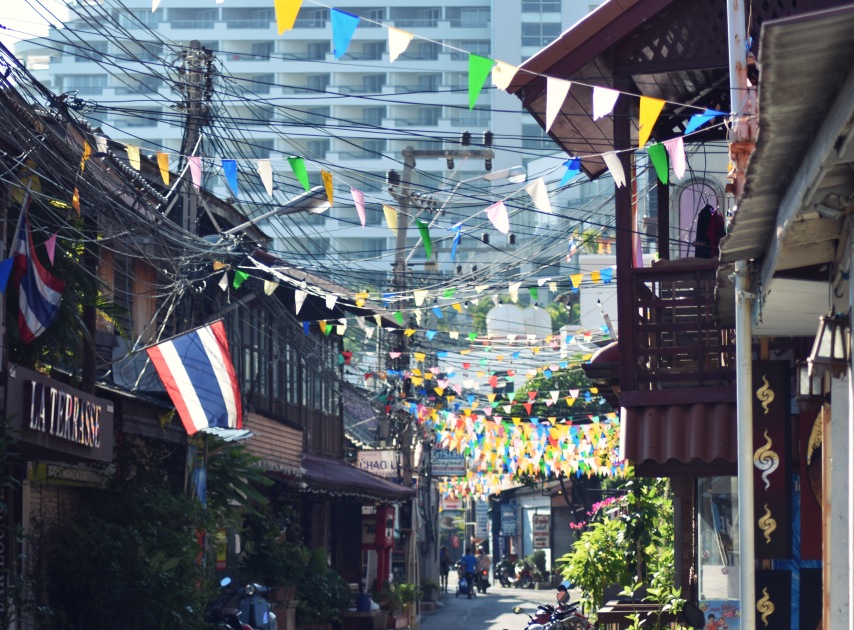 Paul smiled, he couldn’t blame Liz Taylor for that one, even though she had been married to hotel entrepreneur Nicky Hilton for a short while. He was sure she wouldn’t have been seen dead in the palace of concrete crassness. Then again ….

He ordered a beer for himself and Andrew, a soda water, and they talked. And talked.

The rest, Paul thought, is his story.

He had no intention of washing their dirty smalls in public, nor in the filthy waters of Hua Hin come to that. Frankly, he couldn’t be bloggered!

There was really nothing much to do in Hua Hin but eat, drink, surf, and get a massage. Eating he was rather good at. Drinking too. Surfing, he could only manage via the internet nowadays, and as for fishing. Well, Paul knew, ashamedly, that the only thing he’d ever truly fished for were compliments. And he didn’t think he’d be getting too many of those in Hua Hin. Not after he’d been such a naughty boy. Except, of course, from the ‘girls’ in the many massage parlours, who adored his ridiculous hair and who were, at least, going to offer him a happy ending.

It was definitely time to move on.

Paul had assured Andrew that he needn’t be afraid. His inner ‘Woolf’ would not be making another appearance at the door any time soon.

The love-boat was sailing onto calmer waters.

This time with two passengers onboard.

Heading towards a new dawn.