Paul knew Andrew had always enjoyed cock in the early morning, but the noisy dawn chorus which now woke them for the fourth day in a row at 4.28 am was insufferable to them both.

Andrew had often crowed irritatingly about being a ‘morning person’ but even these avian alarm cocks where too much for him! 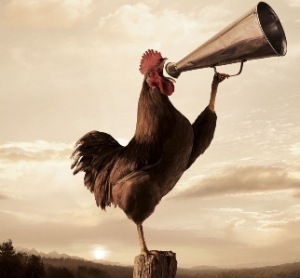 Some of the cocky birds began their wooing at just before midnight up on the Mekong, making it clear to Paul that their body clocks were completely out of cock.

This rabble of roosters, at times what sounded like thousands of them, had ironically made it impossible to lay. Paul knew he had over egged the location of their little shack, on the tiny island in the river. He had, what it seemed, booked them into a gigantic organic poultry farm!

The boys were more than ready to move on or a real cock fight was on the cards. And not one of the feathered variety! It would give a whole new meaning to the term ‘battery farm’!

Paul found it quite ironic to discover such a hatred of these fowl creatures. Especially as he was more than proud that his husband had achieved great theatrical success in the past when playing the part of ‘Rooster’ in the hit musical ‘Annie’.  Andrew had been nominated for a prestigious ‘Olivier Award’ that year for his free-ranging, cocky performance, and was amazingly still able to amuse Paul with his uncanny ‘Cockle-Doodle -Doo’!

Alarmingly, it was now a case of ‘Cockle-Doodle-Don’t’!  Or more than a few feathers were sure to fly!

The time was now 5.20am, way before the sun was even considering making her entrance, and Paul sat on the makeshift terrace of the guest house, in the deafening dark.

Finally dethroning the cock of the walk!

Later that morning, just after the cocks had crowed their last, the boys climbed aboard a local banger and made for civilisation.

The ‘little green bus’ was just as charming and cheap as they had remembered. Paul was a firm believer that if one wanted to truly know a place then public transport was by far the best introduction.

Nong Khai, the Thai city for which they were heading, was a veritable metropolis compared to where they had recently been travelling. He hoped that some relative comfort would provide some much needed ‘shuteye’.

Andrew began to sketch a pencil drawing of the sleep deprived Paul along the way.

The artist chewing incessantly on nicotine gum, until he found a short stop along the way to partake of the real thing!

Paul nodded sleepily, much like a chicken liver on a stick, until the creaky bus pulled into the bus station at Nong Khai.

As he and Andrew donned their rucksacks and started the trek towards their new boarding house, he thought at least now we shall get some sleep – minus the flocking roosters!

After all, he was nothing, if not a cock-eyed optimist!