Loei is a small town in Isaan the region that butts up against the serpentine Mekong in the northeast of Thailand. It is the poorest part of the country and the least visited. Less than one percent of overseas visitors make it here.

It is mostly flat and dry by nature, yet it’s people are most certainly not. It is probably our favourite place in Thailand. It remains untouched by the outside world.

It is real! At first sight some of the province can seem rather dull and ordinary. Were Isaan a beauty queen she may not be crowned Miss World, but she’d be a scream on a night out!

We arrived at our small guest house on the outskirts of the slightly scruffy city of Loei having taken four and a half hours on the bus learning to pronounce it properly. Far too many vowels strewn together for an ignorant westerner.  Eventually I worked it out. Think lurgie without the ‘g’ I told Andrew.  He still hasn’t got it! The place itself, however, has proven to be far less virulent. Yet very contagious. We were almost immediately charmed. In no small part due to Pat, the owner of  ‘Sugar Guesthouse’ our meagre lodgings, who welcomed us like old friends. She was appropriately incredibly sweet.

She showed us to our tiny, yet perfectly formed bedroom, with a smile as wide as Alice’s Cheshire Cat, yet unlike that most fickle of felines, she did not disappear. Instead she hung around to give us all the gen we required on the ‘village’, as she purred on about her home town. She was most obliging, and in contrast to the majority of the proprietors of the smaller establishments in Thailand, her English was exemplary.

She informed us we had arrived on a rather special night, as the inhabitants of Loei were to celebrate the opening of one of their biggest annual events the following day, The famous ‘Cotton Blossom Festival’.

I must have looked blank!

“Or Dok Fai Ban ? ” she added in vain, as if I might somehow cotton on. Sadly I didn’t. I wasn’t even aware Cotton even blossomed, let alone that there was a festival somewhere in the world to celebrate it doing so.

What I do know is that Andrew and I seem to possess  a marvellous ability to roll up to a strange and unknown city when there’s a party going on. It has happened to us on a many an occasion.

In Vientiane, the capital of Laos, we just happened to turn up when the annual food fair was cooking with gas.

In Saigon we once hit the city just in time for ‘Tet’,  the riotous Vietnamese New Year celebration.

And there was one time when we stayed in Vienna when there was a hell of a bash in a gay sauna already in full swing, or should I say full sling. But we shan’t go into that.

Suffice to say, we swung.

We know how to party!

So, of course, we were thrilled that we’d arrived in Loei just in time for the start of proceedings.

We thanked Pat for all her helpful information and headed off to buy a couple of beers from the local ‘Tesco Lotus’ we had spotted on the ‘main road’.

‘You want beer?’ Pat had read our minds. Or noticed our bellies. “Don’t go to ‘Tesco’.  Beer is cheaper in shop on the corner.’

So we strolled down the narrow lane, passing snarling yellow dogs with false confidence to fool them into submission, and came to a wooden shack stocked with essential supplies. We piled a few things we didn’t need, along with our booze onto the counter and, like ‘Mr Benn’ waited for the shopkeeper to appear. Suddenly she popped up from behind the counter to serve us – to our surprise it was Pat.

‘No wonder she told us it was cheaper than Tesco’ I said to Andrew, rather cynically,  on the short walk home.

I wouldn’t have known, but Andrew has the unhelpful knack of remembering the price of absolutely everything. It’s a shame he never went on that dreadful show ‘Supermarket Sweep’. The lovely Dale Winton would have been amazed at his ability to price up the total bill for three tins of baked beans, a Stanley knife and a packet of liquorice condoms in under three seconds.

Supping our ale under a small pergola tangled with exotic blossom, we both laughed at the friendly Pat’s double life. Why not recommend your own shop when in hotelier guise ?  The Thais are nothing if not entrepreneurial. Lord Sugar would certainly approve of our Lady Sugar.

Oriental music plucked and twanged from the small compound adjacent to ours, and when we glanced over we saw a giggle of twenty or so middle-aged woman performing a traditional dance. Each one stopping now and then in a fit of laughter when she had become unsynchronised with the rest of the troupe.

Every now and then we could hear a sharp instruction from the teacher at the front, correcting each member for an errant toe or a misplaced finger. It was an unforgiving routine, and some of the girls were quite obviously not up to scratch.

Having had many an impatient choreographer ourselves in the past, we were both eager to see the strict dance mistress who was taking the class.

Moving over to peer across the lattice fence we were fascinated to get a glimpse of her. Lo and behold – it was none other than Pat!

Yet another string to her bow.

It seemed as though our landlady did everything in this town. No doubt were there a fire she’d whack her helmet on and whip her hose out. She was a remarkably adept woman.

There was room for only two other guests in the tiny ‘hotel’. Bob, a rather taciturn elderly Glaswegian, who wore thick spectacles which made his blue eyes look like Wedgewood dinner plates. And Heinz, a more talkative German from Munich, who quite frankly didn’t let anyone else get a word in edgeways! Andrew went for a ‘quick shower’ and left me with the latter in the garden for far too long.

Before Andrew returned, cleaner than he’d ever bloody been, Heinz had managed to give me a

dissertation on 57 varieties of motorbike he had ridden.

Including the top speed, cylinder capacity, colour make and model of each one.

‘On your bike Heinz’ sprang to mind, or ‘can it Heinz!’ but I was far to English too say it, and he was far too revved up to have heard.

His uncondensed  tales of engines and exhausts had me quite exhausted. I made it a point to keep out of his bike lane for the rest of our stay.

The next day Andrew and I headed down to join in the festivities amongst the cotton blossom. We had no idea what to expect. Pat had told us, now in tour guide mode, that there would be seven thousand dancers from all across the province dancing a traditional form. I had no idea what cotton workers danced, I knew the inimitable Tina Turner had once picked cotton as Annie Mae Bullock, but I had a good hunch the girls wouldn’t be bopping to ‘Proud Mary’!

We came to the banks of the Loei river, a tributary to the mighty Mekong, and were suddenly drowned in a sea of blue, or rather an ocean.

We had assumed Pat had confused her zeros, even with her admirable linguistic skills, and that the real number of performers would be nearer to seven hundred rather than the thousands she had promised. But we were wrong to doubt her, as the streets and sois, were awash with a turquoise stream of glammed up ladies as far as the eye could see.

And as far as my eyes could see not all of them were ladies!

In fact, a sizeable proportion of the cast of this carnival were, shall we say, rather sizeable.

And not what one would call conventionally feminine. In fact some of them looked like they’d just jumped out of the wrestling ring.

The more masculine they were the more slap they’d caked on. It was a dead giveaway. Heavy rouge on a heavy jaw is always a no no. I should know – I too am guilty of it occasionally. 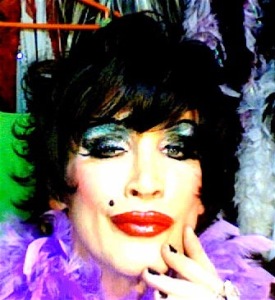 This was a certainly a pageant like no other and it was no drag. It was brilliant.

Every shape, size, age and gender under the timid sun shone out with pride. All dressed in identical costumes. A fetching ensemble consisting of a white blouse, long dark skirt and a fetching sash sky blue. Each one dancing to the same beat, with an audience of excited spectators cheering them on.

Mothers, fathers, grandmothers, grandfathers, daughters, sons and lovers. Not an ounce of judgment, only pure joy and pride.

It was most moving.

Absolute acceptance without the need to accept, because it just came naturally to these people.

I know, or try not to,  some blinkered folk back home who wouldn’t have approved – but the crowd who celebrated in the streets that day wouldn’t have given those ignorami  a goddamn cottonpicin minute of their time. In fact, I’m sure they would have been bemused by such a Neanderthal attitude. It doesn’t seem to exist here.

Thailand certainly has it’s fare share of doctrine and regulation, but not in Loei; not when it comes to expressing one’s true self.

What a town! Friendly, unspoilt and with a sense of humour that would put Bette Midler to shame. Perhaps the distinct lack of foreigners is one of the reasons for this.

It appears that Andrew, Bob, Heinz and myself are the only westerners in town. 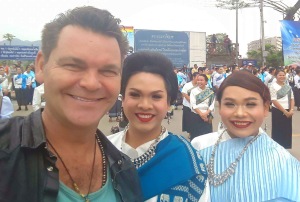 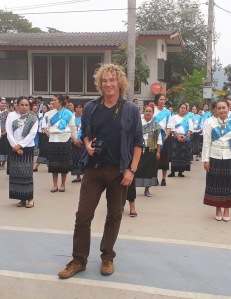 Although we have been welcomed everywhere with prayer shaped palms and authentic smiles.

Actually,  I haven’t spotted our fellow ‘Sugar House’ guests since the end of the opening ceremony. Although I did hear Heinz through the sugar paper walls of our guesthouse in the early hours of our final morning. He seemed to be watching a film involving a pig and a fraulein. I can only guess it was an instructional video on animal husbandry. But taking a leaf out of the book of the delightful residents of Loei, I make no judgment.

And the pig seemed to be enjoying it!

On our final morning I sit, sweater-clad and shivering in the almost frosty garden, in the coldest, yet surely one of the warmest towns in Thailand. Pat exits quietly from the front door of sweet home,

“It’s so cold” she says, “on days like these I wish I could go back to my warm bed for another hour”.

“No, no”, she laughs, “I must go now and do the banking for the village. I am the only one who can do it here. Not all of the people can use a real bank so we have a savings scheme which I run.”

We both laugh at her ability to wear so many hats. She tells me she has to go and direct a piece for the festival later in the day.

“Wow!” I exclaim, “You’re amazing Pat. They’re lucky to have you here. You’re so confident”.

“Or just crazy” she quips.

We guffaw again. And off she goes to be the banker. ‘Miss Loei’ herself.

What a wonderful world.

We leave the city with a slightly sweetened nature but with heavy hearts, as the crowning of the real ‘Miss Loei’ is due to take place at the end of the festival in nine days time and we shall miss the ceremony.

Some may think it sexist, but with so many of the contestants being of the opposite sex, and some slightly in between, I don’t really think that’s a fair critique.

It seems as though ‘Miss Loei’ is open to all.