Our gig in Liverpool was almost a home derby. We have entertained the restaurant several times before so there is something almost comforting about returning.  Although we are both well aware that the crowd expect a proper performance on pitch.  Anything less would be an own goal.  I am glad to report that the score was a good one.

We scored  twice in a game of two acts.

The spectators, as always here, were brilliant. Witty, loud, and responsive, if a little predisposed to a little handball at times!

There were moments I felt more than one hand on my tackle – some veritable fouls from behind too!

Still – we love the place.

The show always seems to level out at somewhere between a party and a pitch invasion! We look forward to the return game sometime next year. That is if we’re not on the bench!

After our Merseyside fun, we headed briefly to Brighton to catch up with our gorgeous family before motoring into the unknown for our next gig – back into another skirmish in Sussex.

Our tour was never planned to be so circuitous.  The  intention was to  begin south and head north. But when we realised Andrew had double-booked us, and had arranged for us to perform by the Solent and cross the Mersey on the same evening,  we had to re-arrange our itinerary, or rather, I had to rearrange our itinerary, to make sure we were in the relevant city on the correct day.  Up and down the country quicker than a whore’s drawers! Suffice to say,  we were a little jaded come our final performance.

And what a performance !!!

Please don’t mistake me – there are moments I happily relish being in an entirely different space to Andrew, but not usually during our act.  It is after all, a double act.

Clue is in the title!

We made our concerns known, in only a slightly ‘diva-ish’ fashion, but to no avail.  The powers that be  were adamant , we should split the show, via an old narrow corridor, between the lounge and the library.  My heart sank – this was going to be a disaster.  A criminal attempt at cabaret.  Moving rooms like a theatrical game of Cluedo, I was convinced it was going to be murder.  Andrew battered to death with the mic stand in the main room and me, stabbed with the  stiletto amid the bookcases.

A bright red one! 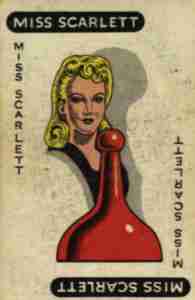 As the show began, every now and then, I dashed like a demented Miss Scarlett, through the corridor into the anteroom.  Shaked and shimmied for a couple of seconds, to let them see what they were missing next door, and then tottered  back through the back passage to rejoin Andrew in the main auditorium.   A term I use loosely, as I think it’s possible we had more leg-room on the ‘Sleazyjet’ flight over !

Intermittently, Andrew would desert me to join the small crowd on desserts through the corridor, and he would then become intermittent himself, as his voice cracked and broke, the signal from the radio mic disintegrating .

There was moment I thought the show might do the same. But then something happened.

That ineffable, indefinable spell that is ‘showbiz’ cast itself across our path once again and the magic occurred. The audience came together, both physically and psychically, and the joint was jumping.

We did have one blip however. The moment where Andrew failed to recognise that one table consisted of some lovely, enthusiastic lads with special needs.  Andrew, always one to supply a special need, decided he would pick on one of the guys in a  saucy slapstick manner.  The gentleman in question decided he’d had enough of Andrew’s stick and proceeded to give him a slap – with the heavy oak chair on which he was sitting !

The audience and I looked on with slightly amused horror as the confused youth blithely lifted the heavy furniture above his head and made to give Mr Kennedy learning difficulties all of his own.  He was stopped from doing so, just in time, by his carer.  Otherwise it could have been Andrew’s most wooden performance to date.

As it turned out the night went terribly well.

The guys that ran the place were charming and the audience charmed – we were pleased – if not a little relieved, and bloody knackered!

And now we have returned to Spain with my mother and our ebullient Aunty Carole – to relative quiet.  After all it is never completely quiet when one has a relative to stay.

We were hoping to be entertaining the good folk at our favourite chiringuito on Saturday for a Halloween special, but it looks as though there’s a  storm a’ coming !  So we have had to move everything a day forward.

Oh well.  No rest for the wicked. 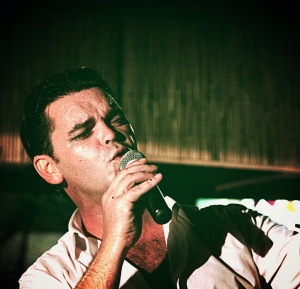 And it’s gonna be a wicked night!

Hopefully, with no more musical chairs !!!