OUT In The Wild Wild West !

This week we returned to our old stomping ground of Sabinillas, the ‘wild west’ of the Costa Del Sol. A place we describe, with tongue firmly in cheek, as ‘Scabinillas.’ and we are reminded once again why we made the joke in the first place.

This was the little town where we once had our ‘Lola’s Showbar’. An experimental concept that failed in almost everyway, due to many factors beyond our control, including a European financial crisis, a volcanic ashcloud and not to mention a rent more akin to a property in Belgravia rather than an underground dive in the back end of a small Spanish town.

It was in this charming vicinity that we were once chased from our bar one night by two drug crazed gypsies, with eyes glinting as manically as the blade they later produced. Earlier that evening they had attempted to ram the locked glass entrance door with a ‘Mercadona’ shopping trolley filled with lumps of concrete. Like two crack-crazed toothless vikings! This was after Andrew had inadvertently wound them into a frenzy by indicating we were closed by drawing his hand across his throat. The highly educated young chaps took this as a threat and decided they would slit our gizzards instead. They waited until we left the building much later and pounced. Beer bottles whizzing past our heads in a scene reminiscent of the classic movie ‘Deliverance’.

I can still hear the banjo playing when I think of Andrew, Lola and I running for our lives into the local kebab shop, where the lovely owners, equally appalled by the unattractiveness and looniness of our pursuers, locked us all inside until the nutters had dissappeared.

The whole incident was quite unsavoury, I have never touched a kebab since!

It was also the town, where the charming owner of the bar we were renting refused to return our ten and a half thousand euro deposit, citing the dissappearance of a few plastic chairs as the cause. Dickhead!

I can also re-call some sparkling homophobic repartee in some of the bars we rarely frequented that was too obvious to go unnoticed. Of course, subtlety is never the premise of any wit used by idiots.

So when a fight broke out recently during one of our local performances, I can’t say I was completely surprised.

I must say, it is the first time that a head waitress has taken the proprietress by the tresses during our cabaret. It was like being back at The Old Vic in ‘Hair’ The Musical! Most eventful. However, I was rather pleased the said waitress went screaming off into the night, after all, there is only room for one show when ‘The Lola Boys’ are in town – and even
though I’ve heard our act described as criminal by some, (mostly criminals!), ’Prisoner Cell Block H’ is not the best backdrop for a few showtunes!

It was like an episode of ‘Bad Girls’ with Carpaccio!

Some of the diners unsurprisingly found the incident a little difficult to swallow, and made a swift escape over the wall. Our palate, having been educated by spending quite some time in the area, was not affected. But I can see, the little town can sometimes be an acquired taste!

Today, however, I am reminded of all the good times we have had, and continue to have, in our Andaluz version of ‘Dodge City.’

The ‘shows’ we produced, on more acquired palettes – this time from a disused building site! 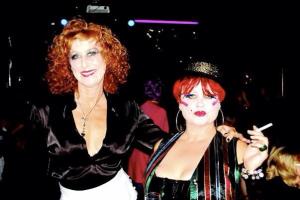 The good friends we made in the process and the wonderful acceptance of the local Andalucian community who seemed to enjoy a couple of theatricals camping out in their midst. Literally! 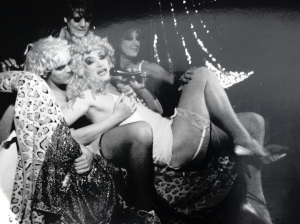 At times it was all very ‘Priscilla, Queen Of The Paseo!’

This town is also where our beautiful little Pomeranian, another crazy bitch, started life.

I can still remember the patter of tiny paws as we walked her along the seafront, stopping only to growl at a child or terrify a pensioner. Ahh – Guapa!

And this week is her birthday. She has reached the grand old age of seven, and is just as irrascible and defensive as she has always been.

Very few people are allowed to venture through our front door and even fewer are able to leave the property without being seen off by our own ‘Hound Of The Baskervilles.’ She’s just adorable.

Only in good old ‘Scabby’.

We’ve both grown quite fond of the old place – it even has it’s own soundtrack. 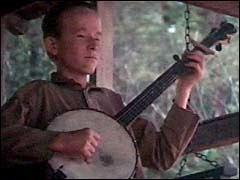