Stranded On The Strand Via The Old Kent Road.

A wonderful party party for a wonderful lady has brought The Lola Boys’ over to England.

After all we do need to work occasionally – Tina Turner wigs aren’t cheap – that’s just the act! 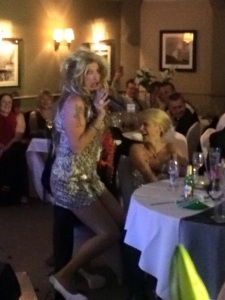 It is always a pleasure to return to the old country.

The home of Shakespeare, Churchill, Lord Nelson and, of course Katie Price!

Nothing much seems to alter.  We still have the marvellously crowded public transport, the charming climate and, of course, the not so cheap fags – obviously I don’t mean the ones frequenting the bars on Old Compton St – most of them come at a much lower price!

Well, so I’ve been told!

We also, thankfully, still have our famous London cabbies.

There was a time I remember when these marvellous chauffeurs were required to gain ‘The Knowledge’ – that impossibly difficult task of mastering the Capital’s maze entirely by memory. Now, it seems that is not the case. Now there seems to be a new expert – the sat nav!

On our first journey into town we furnished our driver with comprehensive instructions on how to get to our destination – this, however, was not good enough, Mr Tom Tom wanted a postcode. Surprisingly, neither Andrew or I know the entire list of London postcodes, silly us!

After several sighs and long silences, not to mention a few phone calls, our professional driver felt confident he knew how to get us to our destination. Two hours later, after going round the ‘Monopoly’ board in the opposite direction and passing ‘go’ more than once we arrived rather exasperated and exceedingly late.

I couldn’t help thinking we should have flagged down ‘Herbie’!

Mr Magoo would have got us there quicker – and taken a better and safer  route.

‘Tom-Toms’! What a load of ball bearings! We’d have had more success using the old Tom-Tom method, i.e. Getting someone to bang a couple drums and we could have found our  destination aurally! 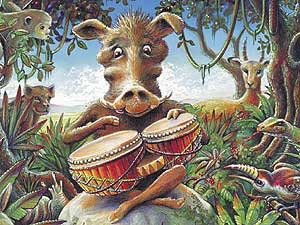 I felt like kicking him in his mud flaps, yanking of his crank shaft and sending him directly to jail without passing ‘go’ by the time we eventually arrived.  Dipstick!

Still, we tipped. How bloody British!

Next time we shall follow the example of Mr Pepys and take a sedan chair- I’m sure we’d have arrived quicker.  Not to mention the additional bonus of being carried along by two strapping young porters!

The ride would doubtless have been vastly more pleasurable.

AND – the congestion charge! I now realise what it means – one is obviously paying to be congested.  It was somewhat akin to Bangkok on a bad day, only worse!

Sort it out Boris!

Which brings me to politicians, probably not the best topic in my current state of road rage.

Luckily, on the continent, we have been spared the infantile yabbering of these middle class pricks, sorry, MPs,(doesn’t it stand for that?) Here, on the other hand, the coverage is endless. We have been treated to night after night of interminably banal ‘debate’.  A steroidal, ‘pumped up’ Mr Cameron, an insignificant Nick ‘Beg’ , the completely loony Nigel ‘Barage’ and that strange Scottish woman from ‘The Crankies’ all banging on about what the British people would like done.  I have a politically incorrect feeling that most of us would like to have them take a hike – somewhere Avalanche prone!

All of this nonsense culminating in David MilliBLAND being ‘grilled’ by that well known,experienced and deeply respected political analyst Russell Bland. Ironically, not only do they share the same surname but they were obviously brought up in the same part of the country considering the way neither of them seemed able to pronounce the letter ‘T’.

‘Gotta’, ‘whatta’, ‘lotta’ etc. Without that consonant anywhere in sight.

‘Wha’ a lo’ a shite!  They should be ashamed of themselves –  if any of them knew what that word meant.

Were Mrs Pankhurst alive today, I’m quite sure she would chain herself to the railings all over again.

All those brave men and women who made the ultimate sacrifice  to secure the vote for this insecure rabble!

I’m never good in the morning – in fact, Andrew has often likened me to Charles Manson – it’s just lucky he hides the knives!

Let’s hope this trip improves – or I may need drop one just to make it manageable and I don’t mean a consonant.

Or as the lovely ‘down with the kids’ Ed MilliBLAND would probably say  –  ‘be–er’!