‘Get Us Outta Here!’

As Paul ambled purposefully beneath a torrid ‘Noel Coward Sun’, he wondered how it always transpired, that at the hottest time of day, in the hottest of climates, he was always the Englishman! He’d left the ‘Mad Dog’ behind, at the cool guest house. Andrew was terribly busy ordering new flavours for his Vapouriser! So Paul set off through the smouldering back streets of Panjim.

As he made his way down narrow lanes, simmering with colourful heat, he dabbed at his brow with an old hankie he’d kept for that very purpose. The vivid pigments which reflected from the Portuguese houses both blinded and enthralled. It was difficult to avoid the open drains and meandering traffic as Paul made his way to the railway agent to collect the tickets for the next leg of his and Andrew’s Indian adventure.

They were soon to be on their way to Karnataka, in the deepest south west of India.  Their new pal Santosh had become a father to a beautiful daughter and it was time to hold the ancient baby naming ceremony. Andrew and Paul had been thrilled to be invited along.

Before that, somebody needed to pay for the journey. Having experienced one too many railway booking counters belonging to ‘The Indian State Railways’, the boys thought it wise to avoid the bureaucratic  hideousness that is inevitably involved, and let an agent take the strain.

Which one did, for a cool fiver! Quite a lot considering the price of the journey was only a tenner. Still….

Sweating alone in the tiny booking office, Paul felt a thump on his left shoulder, and turned immediately, half-suspecting to see Andrew grinning, having caught up, post Vape order. Instead, he was greeted with a gappy smile and a thick set bloke in a sari.  Admittedly, a very pretty piece of clothing, but it was doubtless, a fella. 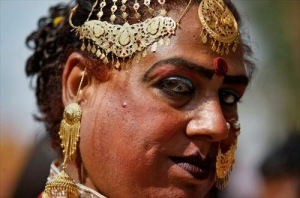 Paul learnt later, that this lady was a member of an Indian caste of transvestites. Some of them gay, some hermaphrodite and some, poor sods who’ve been kidnapped and castrated!

Known as the Hijras, they often performed, uninvited, at functions and sometimes worked as prostitutes!

Paul couldn’t help but see the similarity to his own line of work. The Lola Boys’ were little more. Only better paid! 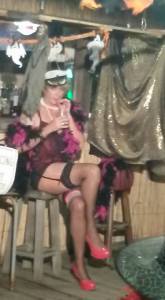 Open as ever, yet a little perturbed. This was no ‘Ladyboy’!

He smiled as the guy done up like a gal clapped his hands fiercely and then made a furious begging action. It was quite obvious what she wanted.

And it weren’t make-up tips!

Paul shrugged and showed his empty trouser pockets, attempting to appear as nonchalant as possible, yet failing dreadfully. The fact that it was an honest action, that he’d parted with all his cash moments previously, the ticket agent having no change, made no difference. This was a frighteningly heavy-set woman, with the charisma of Vin Diesel, and she made Paul very nervous.

‘I’ve no money’, he mouthed largely, in the way an ignoramus talks to foreigners.

Ma Diesel  gave several nods of the head, and thrust her hand forward in the manner of a Right Jab! Paul ducked, but she was too quick and her palm slapped on to the top of his scalp. She muttered a few words and then again made the same begging gesture.

Paul knew at once, that he’d just been blessed. And Ma wanted something for the collection box!

‘I still have nothing. No Rupee!’ he said.  Too slowly, and far too loudly.

Ma stared for an endless moment, and then made a furious action with the saintly hand she’d just used to bestow her blessings. She whirled it around and made a couple of tapping motions as if trying to reverse the spell.

‘No good now love,’ Paul said calmly, ‘you’ve given it so you can’t take it back!’

He laughed to himself, in a slightly condescending way, and would have felt guilty, were it not for the fact Ms Diesel had followed him into the travel agents and had then been terribly bullish. And bullying was something Paul always stood up to, after having had a very good training at naval school in Waterloo.

This bully was gonna meet Waterloo if she didn’t bugger off.

Feeling the resistance and perhaps, believing the lack of cash line, the Hijra took her leave, without so much as a smirk.

Paul put his head though the small brick doorway and lent into the brilliant sunshine. He watched as the brash and bejewelled beggar-women made their way down the narrow lane. Criss crossing the street and putting their hands together with a violent clap, to let people know they were around. Some gave willingly, and some were more than cajoled.

The ‘girls’ hit the butcher, the baker, and the joss-stick maker before they finally turned the corner and their riotous energy dissipated. Paul felt a collective sigh, much as if a hardened girl-gang had just left one’s subway carriage.

‘They may have swiped some jewellery – but we’re all breathing’ he thought.

He was sure he wasn’t the only one.

He then made his way back to the very pleasant guest house he and Andrew were sharing. He looked at the third class railway ticket for which he’d just overpaid enormously, and wondered if he would still be breathing when Andrew found out.

The following day, following far too many hours on a hot train, Andrew followed Paul into an equally hot hotel and they both wondered what the hell they were doing there. Mangalore, a coastal city in south west India, at first sight seemed ordinary, shabby and most unchic.  After venturing out, and having time to explore, it seemed ordinary, shabby and even more unchic.

After stumbling through the early morning  fumes, along a crumbling dual carriageway, and finding nowhere for miles which served anything resembling coffee, Andrew said, with some tongue in cheek,

‘Get us outta here!’

An hour later we were in a taxi heading deeper into Karnataka. A state which has yet to convince us of her charms, of which there are doubtless many. But perhaps, more hidden.

Much like those of the bolshy Hijras I had met in Panjim.

But as I’ve learnt, it is not always the most obvious that has the greatest appeal.

And so we wait, with baited breath, for this part of ancient India to reveal herself to us.

She’s already been quite a tease.

But if she slips her sari off her shoulder and gives us a wink, we shall no doubt fall for her dubious charms.

Just as we’ve done with the rest of this intriguing country.