Somewhat jaded after our month-long jaunt around majestic Rajasthan and four more ragged days spent in the arhythmic heart of New Dehli, we finally arrived in the tropical south of this giant country.

Palm trees waved a breezy emerald welcome and the Arabian Sea lapped us up like an ocean of warm salty Chai. Not a Mediterranean Blue it’s true, more like the shade one’s jeans come back after they’ve been to the ubiquitous ‘Loundry’ here. An Indian Denim. Faded, yet oh so comfortable. 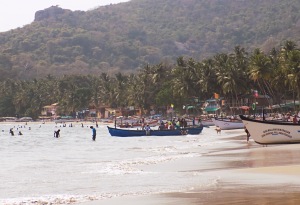 The long journey here was less so, but we’re both used to that by now, and the destination is always much more pleasurable when there have been a couple of life threatening moments on route.

Our eventual taxi, to the very south of Goa, went at a pace that would have put Michael Schumacher to shame. We nearly ended up in the same condition as the unfortunate sportsman on more than one occasion. Things only improved when Andrew convinced our wacky racer to come to a halt outside a ‘Wine Shop.’ We both sank two large bottles of beer faster than our driver had completed the last ten ‘K’ – and that’s saying something! Now, as pissed as Mr Magoo in the driving seat, we were able to enjoy the blind corners and oncoming juggernauts with the same hilarity.

After our hastened arrival we settled into our modest hut, content amid the candied bougainvillea and fluorescent hibiscus, we didn’t care that we had no running water as of yet. We knew that it would probably arrive sooner or later, and anyway there was always nature’s bath in which to cleanse our weary limbs, just yards away across the almost golden sand.

I was the first to succumb to her watery charms. Hobbling clumsily over the red-hot sand,like a lobster missing a claw, I practically fell into the warm embrace of the mighty Indian Ocean. My limbs melted into the tea-like waters and the ache from weeks of wearing a rucksack dissolved within her saline cloak. As I floated easily on my back, appreciating the dusky sky, I began to daydream. Of fairytale forts, and lakeside palaces, and huge castles in the desert. Of mighty mausoleums. Of all the wonders we had been fortunate, and intrepid enough to visit. This was my first moment of real stillness in weeks, and as I sank into it, my mind melted into a kaleidoscope of colours and scents and sounds, of all that had gone before. The beauty, the poverty, the kindness, the stupidity of this great nation.

Our entire Indian adventure washed over me as if I were a giant floating canvass and this miraculous country, the most vibrant of palettes.

I felt grounded, yet aloft, as I became my own watercolour awash with a sea of memories. It was almost spiritual. I breathed in ……

Then, without warning, the biggest wave imaginable crashed heavily over me, filling every orifice with a gallon of seawater and sending me crashing onto the seabed. Tumbling amongst sand, and God knows what else, I held my breath and attempted to resurface. As I did so, another massive breaker hit me and took me back to the ocean floor. I spun violently, in the uneven style of a cheap Indian washing machine. Eventually, I staggered, in the most ungracious of manners, back onto the shore. My ears, nose and mouth grit-ridden and full of seawater.

My exotic reverie had been cut short.

My fantasies were instantly drowned in that stagnant pool known as ‘reality’. Really! In an instant!

I had to smile – perhaps through gritted teeth. Yet even this experience was so terribly Indian. The sublime becomes the submerged so readily here!

If there is one thing I have learnt about this incredible nation it is to expect the unexpected – at every turn – with every smile – and with every wave!

What I’d not yet come to expect was some of the sheer ignorance some tourists readily unpack as they arrive to avail themselves of some of the more obvious pleasures India has to offer.

There is a distinct difference, in my opinion, between the holidaymaker and the traveller. I, rather snobbily, put Andrew and myself into the latter category, even if my husband can sometimes veer towards the former, the nightmare train journeys and rattling local buses surely put us firmly into traveller class. Not to mention the dodgy choice of lodgings we invariably make.

Our current abode, for example, has no air con, just a giant ceiling fan that resembles a defunct chopper. It spins so angrily sleep is made quite impossible. The only setting is ‘Chinook’! So one is either forced to swelter in silence, or nap fitfully, as dreams of ‘The Deer Hunter’ surface horrifically between fantasies of ‘Miss Saigon’! I woke several times last night whilst pressing an imaginary gun to my head and screaming ‘Do it then you bastard’  to a confused Andrew, who I was convinced was a crazed Christopher Walken…

It is not a restful room!

However, with an asking price of eight quid a night and a sea-view to die for, we ain’t complaining. Well not to the management at least! They are far too accommodating.

Others, sadly, do. I overheard a very fat British woman impolitely send back three salads yesterday because they weren’t to her liking. Not calorific enough I should imagine. All of it done in the most graceless fashion. Shortly afterwards an elderly gentleman from ‘The West Country’ assured Sandhu, our charming waiter, that the Kashmiri was quite wrong when the poor chap brought out a fruit salad with curd, as ordered.

‘What’s this white stuff ? I never asked for that!’ The old fella huffed and gruffed.

‘Yes, it is mentioned on the menu’ Sandhu smiled.

No ‘please’ in sight, not even in the near distance.
Reading the menu properly the old fart had to concede.

Sometimes when encountering this, almost colonial behaviour, it can make one quite unproud to be British, especially when remembering our history here. I’m surprised these idiots don’t receive a swift fuck off please from their graceful hosts. I know what I would do were the salad bowl in the other hand!

But then I’m not Indian. It is not in the Indian nature to be rude. Certainly not in my experience. It may be very easy to mock their choice of the vernacular when speaking English, as I have heard many idiots do, but I am yet to hear an Englishman who speaks Hindi as well as they do. Or Urdu. Or many of the other 1652 local languages spoken in this land. Some of the very ordinary people we have met have been in possession of quite extraordinary linguistic skills.

A young waiter called Abdul, whom we met in the desert city of Jaisalmer, spoke five languages. Get your tongue round that Joe Bloggs!

I must emphasize it is, of course, not everyone who visits this land for just a short time, that comes with an inferior mind and a superior attitude. We’ve met some great lads, builders from South East London, (who,coincidently, happen to be old friends of our good mate Dave in Spain! What’s the chances eh?) They adore it here and couldn’t be nicer to our Asian friends, even finding time to teach them the art of cockney rhyming slang. The look on their hosts ‘boat-races’ when they get it right is a picture.

A shame all The Brits don’t behave with such class – some of them should be taking a sharp ‘Brexit’ off of the subcontinent. Just as they did once before.

Other than the odd visitor, Goa makes a great visit! Marvellous beaches, stunning scenery and replete with friendly locals and some great tandoori fish. It’s going to be hard to leave and return to the other India, but easy at the same time. One can have too much of a good thing. 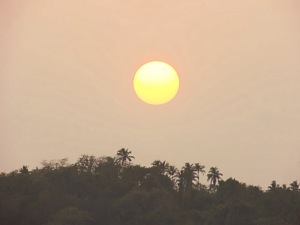 India teaches you that too.

Although when we’re sweating and swearing in Madras come the blistering May heat – that may be a lesson both of us have forgotten.

This unique country wouldn’t have it any other way.