Kampot, a charming riverine Cambodian city, famous for it’s pepper, used by top chefs the world over, and it’s quaint nineteenth century, french-colonial architecture.  It may be tired, but a Notting Hill designer would charge a small fortune to replicate the effortless gallic chic that pervades this place. 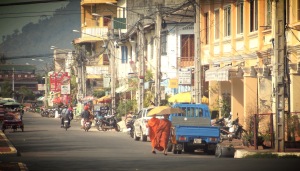 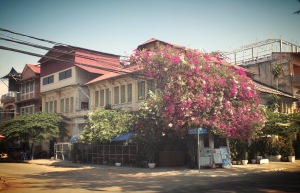 A faded but resplendant touch of french Indochine, that captivates it’s visitors like a talented Parisian tart on the Rue Pigalle.  We  are completely caught up in the limbs of this seductress, exploring each avenue of shuttered shopfronts with an almost salacious delight.

We, however, are not residing in one of the more high-falutin establishments on the left bank.  Non.  We have elected to stay at Captain Chim’s.  A much more local kinda place, downtown near the bus station !

After meeting the Captain and his lovely shipmate, Ria, we waited for our room to be cleaned, or built, whichever happened first.  After convincing Ria that we really didn’t mind having to share a ‘big bed’, (Andrew assuring her we would go ‘top to toe’), we met a marvellous character by the name of Mick.

We learnt that Mick, a wild, beautifully blue eyed, rough around every edge, type of bloke, had been in the Royal Marines for twenty five years.  We also gathered that he taught Katami, the art of fighting with a Samurai sword, plus almost every other form of vicious combat one can imagine, mostly using unspeakable weapons.  We then learnt he had been into battle on more than one occasion, worked tirelessly as a merciless mercenary, and now lived in the Cambodian countryside building houses out of giant lego and growing radish.

He also told us that we were staying at one of the best places in town, and if we encountered any trouble we should inform Captain Chim immediately, who would be more than happy to have the perpertrators punished.

Apparently when the local baker was robbed of some dough last month, the two guys kneading in the kitchen, caught up with the thief at the next roundabout.  They then proceeded to turn him into a human doughnut – plenty of oozing jam and a hole through the middle and everything ! Let’s just say, after they’d proved their point, he didn’t rise.

It’s not just the pepper that is volcanic here, the locals are a spicy mix too.

After eventually checking in to our room, for practically a peppercorn rent. A fiver a night! We headed to the river and happened to find ourselves in the ubiquitous Irish bar that we always seem to discover in these slightly sketchy Asian towns.

Before our stout was even contemplated, there was a loud crash and a female tourist came off her moped right in front of us. She lay in the road, her head bloody whilst ours were still settling!

It took a while, but eventually she was moved onto the pavement, and surrounded by concerned and fascinated Cambodians, she began to revive.  There followed a fiery debate between the cyclist and the onlookers as to what had actually occurred, which  we decided to stay out of, not wanting  to throw more pepper into the Kampot.  It was a sufficiently heated already.

Later that evening we met our ex-marine mate, Mick.  When I asked for a photo, he was happy to oblige.  However, he made me assure him that I would not publish it on Facebook, it seems there are some cyber folk out there who would be more than happy to unfriend him.

I promised him I wouldn’t, and as a thank-you he showed me one of his special moves, that ended with him almost karate chopping me in the neck!  As I felt the breeze from the wake of his substantial forearm cut across my gullet, I heard Neil, the Irish landlord, chastise my ex-navy buddy,

‘No martial arts Mick. Not here!’

As I took a very deep breath, feeling fortunate I had avoided a partial tracheotomy, Mick apologised, his baby blues full of contrition.

‘Sorry’, he said, ‘that’s why I got barred the last time.  Some cunt wound be up and before you know it he was on the floor with a fractured collar bone and a broken nose.’

When he left for the loo moments later, I told Andrew to lay off any of his wind-up jokes and to just smile and be compliant.  My nose is, after all, odd enough, and I love the shape of my husbands.  I didn’t want either of us taking any risks. We didn’t want to put Mick’s nose out of joint!

Today, after a visit to the pepper co-operative, and a walk along the beautiful riverside into some jungle, we bumped into Mick at Captain Chims.  He has invited us to his house in the foothills of The Elephant Mountains for a bar-be-que and sleep over.

He is so interesting, and charming, that we are both, irresponsibly tempted.

Albeit, slightly apprehensive that any dish he may happen to serve up, could be a little too spicy, even for our seasoned palates.

Looks like we may have to take his invitation with a pinch of salt, and leave the pepper alone.