Rolling Down The River!

At 8 AM we boarded our boat – (the H.M.S number 13!), with just a little wariness and and more than a few tots of Thai Rum to hand.

We were going to sea after all – well, to river.

Both Andrew and I looked and felt dreadful. 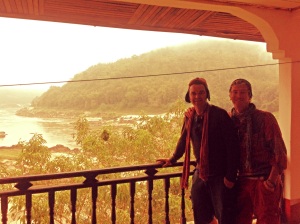 But, we were looking for adventure and so it came and ‘Thai-Boxed’ us right in the proverbial ‘eek’.

We met some wonderful people on the jetty, but were slightly reticent to engage as we knew we would be sharing the next ten hours with them on a barge that looked as if she wouldn’t be comfortable on The Thames, let alone the mighty Mekong.

The ‘Marchioness’ came to mind but I swiftly exorcised that thought and certainly didn’t share it with ‘His Highness’, who is not exactly Lord Nelson when it comes to messing about on the water!

I was seated next to a wonderfully jolly South Korean named ‘Muang’ and as I took my seat he rubbed my knee and whispered that all his Western dreams had come ‘tlue’! No bullshit!

I pointed out my partner to him, on the pier, still smoking, at which point he lost complete interest in my thigh and frothed at the mouth, rabid, for what he called ‘Superman’!

When Andrew did board and I politely introduced him to Muang, my ‘better half’ immediately decided to bring up North Korea and make dodgy hand signals suggesting political instability – I think!

Thank Buddha our Korean Friend was focussed more on Andrew’s crotch than his hands. I kicked him hard. Andrew that is – not the Korean!

We went aboard, waited for half an hour and came ashore again, for a cigarette, or seven! We then re-boarded our vessel and waited again, for twenty minutes, we then alighted for another three cigarettes and a swig of some pre-noon grog, supplied by the beautiful Nina. An itinerant worker from Chicago with some great tales and a lot of wisdom. I guess travel broadens more than just one’s horizon.

We then made ourselves as comfortable as we could on our nunnery-like wooden seats and waited another hour before our tub number thirteen was ready to cast off.

By this time our naval supplies had been severely dented!

But board we did, and, eventually, we set sail, (well, motor), for deepest darkest Laos!

We sang, we chatted, we made many new friends amongst our shipmates. Muang even read our palms – he told Andrew he had a lot of anger – surely he didn’t need to look at his hands to work that one out!

Muang giving Nina a hand too!

After six hours sitting adjacent to a rampant, homosexually repressed superhero fan, I was more than ready to disembark…… And seven hours later, ahead of schedule I might add – we did!

Riverworn and ready for rest, we clambered up the sandbanks, backpacks and all. French pensioners flying in every direction with very little ‘joie de vivre’ – most undignified! 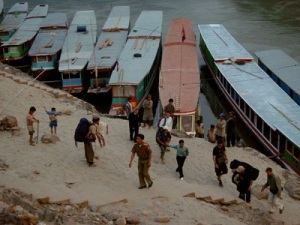 This was a no horse town where they hadn’t even begun to imagine the stables.

Not even a chicken crossed the road!

However, this remote hamlet, enterprisingly, charged London prices for cigarettes and cigarette papers!

So a horse could be on the horizon soon!

We threw our bags into the ‘hotel’ and I persuaded Andrew, who is always ready to sleep when he encounters a new bed, to walk out, and so we did.

After withdrawing one million kip and feeling slightly smug at the fact that at least, in Laos, we were billionaires, we found the place that seemed to be ‘happening’.

Great food, great drinks and then a great character, who called himself Victor, came to charm us.

We were offered everything! Of course we couldn’t resist, and when he withdrew an incredibly strange pipe from his deep coat pocket and said ‘ have some’ – we thought it too impolite to refuse.

It was an odd concoction – a potent mix of liquorice and tar! But it smoked well and was strangely effective. So effective that the second leg of our journey the following day went twice as fast as before!

Or perhaps that was just the peace-pipe continuing to work it’s magic!

Whatever the reason, downriver from Pak Beng was a breeze.

A seven and a half hour breeze! Made somewhat easier by the charming company of Ryan, Jaime  and their wonderfully behaved son, Liam. A gorgeously hip American family from Atlanta, Georgia. We shared beer, laughed and, admittedly, had to play more than a few games of ‘Ninja’ turtles with little Liam.

I lost every time – the kid was four!

Yet, after some of my previous ‘blogs’ it was great to be reminded that all ‘Yanks’ are not ‘Yankers’!

The scenery was majestic and at several beaches the local children would suddenly appear from the jungle and paddle excitedly out to our boat to peddle their parents’ wares….

It was completely touching.

So now we are in Luang Prabang…… An ancient and very well preserved city in the heart of Laos.

Which is probably the way I should describe ourselves at the moment.

Only we’re not quite as well embalmed as this beautiful place.

Two days travelling on a showboat, a very slow boat, down the Mekong and we’re ready for some dry land. ….

So watch out Luang Prabang.

‘Hark Hark It’s After Dark – The Lola Boys Are coming To Town’.

But not quite yet – we have a few naval supplies left and some residue in the peace pipe!

‘Freshening up’ I believe they call it!

Then out into the Laotian night………