Paul stood in a West London branch of Tesco’s attempting to deflect the ardent admiration of a bespectacled oddball who was quite convinced that he was a member of a famous rock band.

‘It is you isn’t it?’ he said, in a clipped South African accent, whilst reaching into his pocket for the ubiquitous mobile camera phone.

‘Really’, replied Paul, rather kindly, as he stretched for a Canteloupe.

‘Yes. You’re with that band. Not ‘The Stones’. The other one. Wow! Yeah! Do you still have two kids?’

‘No.’ said Paul laconically, ‘I don’t have them anymore.’

His mistaken assailant, not remotely concerned with what had become of Paul’s two imaginary children, went on,

‘Thank you’, Paul replied, with mock magnanimity. He then held his index finger to his lips and gave the guy a conspiratorial ‘Shhhh’, as if it were their secret. He didn’t want to ruin the moment by letting the bloke know he was really a has-been West-End performer who now travelled the world doing a slightly tawdry cabaret.

The realisation could dampen both their evenings!

The gentleman had begun to follow Paul around the aisles, now with video-cam high in hand, as Paul fumbled through the booze section and toyed awkwardly with a Christmas Party Pack of Petroleum Jelly.

They were beginning to attract attention.

A small group of customers had begun to take notice of the amateur auteur and were all now staring, attempting to figure out just who this mysterious, frizzy-haired figure was parading around their local Tesco Metro.

They had now begun to check out his basket too – as if for clues. Paul immediately regretted the three-pack of Vaseline. He had only picked it up it for his lips – but Joe Public could be terribly cruel!

‘Never’ said Paul, with just a hint of facetiousness.

He made swiftly for the ‘ready meals’, attempting to put a little culinary apartheid between him and his new found fan. Not to mention the other ten or so people who were now heading towards the Chicken Kievs – all with their beady eyes on Paul’s tired ‘eek. He began to feel a little disconcerted.

He and Andrew had only just arrived from Gibraltar, after a particularly turbulent and horribly early ‘Sleazyjet’ flight. Added to which, the overhead lighting in Tesco’s was certainly not conducive to a good complexion. Paul knew he was probably near florid neath the fluorescence.

Or ready for a supermarket sweepstake!

Just before he could find the gentle version of ‘fuck off’ he was looking for, the manager of the small store came rushing up his aisle. He looked at Paul with slight panic, and a little puzzlement, then turned to the little man who had started the melee at the melons.

He then turned to Paul, and with a slight dip of the head, he apologised,

‘I am so sorry you’ve had to go through this sir’ he said.

He then couldn’t help himself,

‘It happens from time to time!’

The crowd who’d gathered around fingered the odd Shepherd’s Pie and averted their eyes, they quite obviously did not want to suffer the same fate as the poor South African who had now been ejected by a junior member of staff.

Paul continued his shopping. This time accompanied by the manager who even placed items into his bagging area on his behalf.

And there was a ten percent discount.

The price of fame Paul thought!

The last time he thought he’d actually be recognised for real had been on the Costa Del Sol just days earlier.

Paul and Andrew had been attending the inauguration of a bench for their dead friend.

Paul had turned up turned out in an Ecuadorian poncho, a thick scarf, bobble hat and sunglasses. He had the look of an Andean Llama farmer combined with that of a Moroccan/Mexican drug baron.

His fashion had been necessitated by the fact that the skin on his face was shedding  like that of dead python, due to an acid solution he had applied earlier that week.

He made his way towards the widow of their friend, dropping his ridiculous disguise to greet people here and there, making his ‘get-up’ quite pointless in the first place.

‘What have you done?’ she said, looking with slight concern at Paul’s scabby visage.

‘Acid love’ Paul replied. Then qualified the remark swiftly, ‘face acid that is!’

Literally at his face!

‘There are no press here are there love?’ Paul asked.

‘No’ she assured him, ‘they could not come.’

He now knew that he had both over-applied and left the solution to work for a little longer than necessary. It was a ’No Photos Mr De’Olive Press’ kinda day. One on which to stay home perhaps. But it was too late. The damage had been done. He also knew he should never have purchased the stuff over the internet.

And he had always known one could never trust ‘The Press’. Even when it seemed they weren’t there. 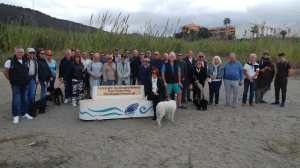 The Boys first show in Twickenham had been a riotous success. Family and old friends had joined with their fans and the atmosphere was most convivial. Paul had found it refreshing and was quite elevated. Not only by the crowd, but also – a stage. It felt wonderful to be lifted a few feet into the air once again. And oh so natural!

The following night’s performance was an altogether a different affair.

It was to be a charity night for a fantastic organisation supporting mental health through music. The charity was aptly named‘Tonic’. The only tonic Paul usually worked for was that which diluted his gin, so it felt good to do some good. Especially as his late father had had more than his fair share of less lucid moments, having been ‘sectioned’ on many an occasion during Paul’s childhood.

And adulthood come to that.

His father’s musical taste during bouts of highness had been less than a tonic. Barry Manilow had blasted relentlessly throughout Paul’s ’O’ level’ revision!

Even now he wondered how he had made it through the rain? Could it be magic?

It was clear he’d been scarred!

Paul and Andrew arrived for their show in their full ‘get up’. Mascara and guyliner galore. Glittered and preened to not quite perfection – and freezing their bloody rocks off.

As they arrived at the ‘Stage Door’, which also served as the main door to the pub, a small blonde, toothy presence bounced out of a flash car parked at the kerb,

‘Hello you’, said the perky little gent as he looked towards Paul.

‘Hello’, Paul gushed, ’How are you?’ He had assumed he was greeting one of their punters, until the guy got closer and he realised immediately it was the British television comedian Bobby Davro.

‘I’m good, yeah great. You two the turn tonight then?’ he said looking towards Andrew, who was standing with his mouth only slightly ajar.

Bobby didn’t wait for an answer,

‘Is Graham still doing the bookings here then?’ he went on, ‘great guy, and is Mark still around?’

Bobby didn’t wait for an answer,

‘This is Ronnie. Russell Brand’s dad,’ he said introducing a chirpy fella with a heavy cockney accent and teeth to pay for!

‘You’re looking good fellas,’ Bobby continued’ I’ll ‘ang around and watch your set for a bit!’

Bobby didn’t wait for an answer!

After several beers at the bar which involved a stand-up involving as many gay and muslim jokes one could muster into two minutes, Bobby took a breath,.

‘We’d better get on’ Andrew said.

Paul offered Bobby and Ronnie a drink but they would not accept Bobby had bought all the sherbets. Paul thought that made him a very generous comic.

A few minutes later and he and Andrew were blasting out their opening number.in the spotlight.

Paul began a monologue regaling the audience with his experience the previous evening in ‘Tesco’s’. He then made a joke about being mis-recognised again, only this time by the famous comedian Bobby Davro. Mr Davro, who was still at the bar, laughing a little too loudly, took his moment.

Then, in a moment dripping with surrealism, Paul heard his partner in rhyme announce on the microphone,

‘The fabulous, amazing Bobby Davro ladies and gentlemen. Bobby, don’t you wanna come up and do five mi…..’

Bobby didn’t wait for an answer!

Ten minutes later he had got through three of Paul’s better impressions; one of Andrew’s best numbers; plus the boys’ finale!

It was truly time for a ‘Bexit’!

Andrew kicked ‘The Lola Boys Applause’ music into play, (they always travelled with their own applause, it made life so much easier!),

And Paul pushed Bobby Davro, very kindly, yet firmly, off the stage,

It had been great fun. 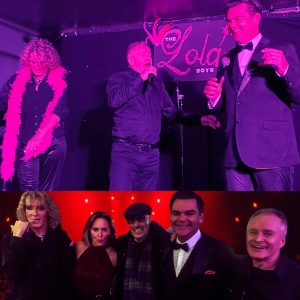 To have an old pro was not a first for Paul, but one joining their show unexpectedly had been.

It had been thrilling. If not a little unnerving.

Although Mr Davro’s jokes had not all been politically correct, his timing and stagecraft were exemplary.

His knowing when to get off – less so!

Later, Paul and Andrew learnt from their good friend Julia, who had been organising the event, that she had once performed in pantomime with Mr Davro some years earlier.

Playing Dandini to his Buttons! (Apparently that wasn’t a euphemism!)

It had been pure coincidence that he had rolled up in his Roller that night. Ironically he hadn’t recognised her, yet Paul and Andrew were most familiar. Julia seemed rather relieved that Mr Davro had left the stage when he had, she was, of course, more than familiar with his antics.

She didn’t wait for an answer.

The following day after two shows, Andrew and Paul were somewhat jaded. The feeling grew even worse later that evening when they went to the cinema to see two films back to back.

Not a lot of laughs!

They were now truly Jaded!

In fact Paul was developing a look of Joaqin Phoenix.

They had one more show to perform on Sunday night – he reckoned that was about all he had left in him! Or he may end up like Ms Garland. One ‘J’ or the other!

On Sunday afternoon Paul and Andrew walked aside Old Father Thames and reminisced of their London history together. They’d spent many happy years in the great metropolis. Up both ends – East and West! 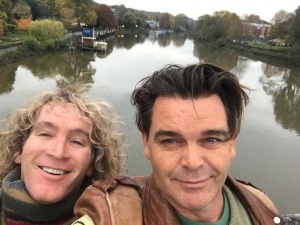 Andrew took an age buying a pint as Paul gazed into the murky water, the river’s current running as fast as his thoughts. He had grown up in London and memories re-surfaced.

Paul bought the boys second pint in under two minutes. He was ‘recognised’ at the busy bar and therefore served first. It was hilarious. Paul made a mental note of what ‘After Shave’ he was wearing (even though he hadn’t shaved!)  For some strange reason, everyone thought they knew him.

A star not born!

Later, post shave, and after a lunch of epic proportion, cooked by their wonderful hosts, K.P. and Julia, the boys were back on stage.

They had a fabulous time.

The next day, with a Bloody Mary on the rocks, they were heading at thirty-two thousand feet for a similarly sited Gibraltar.

When Paul eventually fell back onto his and Andy’s faded red leather settee he caught sight of himself in the mirror, just above the television. He really did look like a cross between the Joker and Judy Garland – Jaded in every way!

Their gigs at ‘The Turk’s Head’ –  in the same room where ‘The Beatles’ had played  and  partied, after wrapping up their movie ‘A Hard Day’s Night’, had been most successful.

But for ‘The Lola Boys’ it had been a hard three days’ night !

‘Are you ready for bed babe?’ Paul asked Andrew, as he fell up the stairs.

Paul didn’t wait for an answer!